Consensus Politics: A Key for Sustainable Growth, an event organized by the Embassy of Chile in Helsinki in close cooperation with the Finnish Institute of International Affairs – FIIA took place on the 29th of May in conjunction with the state visit of H.E. Michelle Bachelet, President of Chile. The Chilean Minister of Foreign Affairs, Dr Alejandro Foxley accompanied President Bachelet on her first state visit to Finland, the programme of which also included meetings with Prime Minister Vanhanen, Speaker of Parliament Niinistö and representatives of Finnish industry.

The event offered an opportunity for the Finnish labour market organizations present to elaborate to an international audience on their raison d´être and on their past and current challenges. Most of the interventions at the seminar also emphasized the similarities between Chile and Finland: the two countries share similar values and visions regarding social justice and equality and are able to learn from each other.

Professor Väyrynen opened the seminar with some welcoming words for the participants, offering the podium first to Foreign Minister Foxley. Dr. Foxley began his intervention with a personal recollection of visiting Finland in 1992 during the recession. As grim as the economy may have looked at the time, now 15 years later Finland is peaking. Dr. Foxley marveled at how Finland has been able to restructure its economy rapidly after the recession and fashion itself as a prime example of a knowledge-based economy. What is remarkable in the Minister’s opinion, however, is that this was done without compromising social protection and security in Finland. Consensus politics, cooperation of different societal actors, has played a considerable part in the success of this effort.

In the past 15 years Chile has also transformed itself: since the beginning of the democratic process in Chile the GDP and the exports of the country have increased considerably, owing much to the extensive free trade agreements (e.g. with the US, China and India) Chile has entered in recent years. Whereas Chile is advantaged by its natural resources and its location relatively close to large markets, income inequality is still a problem in the country, Foxley – holding a PhD in economics – explained. The core of the economic dilemma faced currently by Chile is the following: how to promote income equality and social protection without antagonizing the private sector of the economy and big multinationals investing in the country? Consensus politics and the Finnish example have potential in solving this dilemma, Foxley concluded.

Mr. Arto Ojala from the Confederation of Finnish Industries – EK- took to the podium next. His presentation was a rich and rapid general tour of the organization and mission of the EK as well as of the typical characteristics of Finnish industrial relations, labour legislation and labour market model. Finnish industrial relations are characterized by a high rate of organization with an aspiration towards important tripartite consensus. Mr. Ojala made but a fleeting reference to the failed concentrated income policy agreement (Tupo) of the current year. Future challenges of the Finnish labour market include an ageing population, maintaining industrial peace and combining global competitiveness with social security: this last point of Mr. Ojala’s intervention was hence identical to Minister Foxley’s concluding remark concerning challenges faced by Chile.

Mr. Matti Huutola of the Central Organization of Finnish Trade Unions – SAK – was the next speaker. His Finnish-language presentation concentrated on the history and the role of the labour movement in Finland. Like all the interventions of the seminar, Mr. Huutola’s speech too revolved on the theme of reconciling globalization with domestic social security. He described the labour movement as having three main functions: defensive, securing and innovative. The effects and pressures of globalization on the domestic economy and labour market call for activation of all these functions: Finnish jobs must be protected and secured but profound changes in the labour market must also be anticipated and adapted to. Although more pessimistic in tone about globalization, Mr. Huutola also concluded his presentation on a positive note lauding the Finnish model of consensus politics.

After Mr. Huutola´s turn at the podium, an hour into the seminar, President Bachelet arrived in the auditorium accompanied by President Halonen. At this point a large group of reporters of Chilean media took their positions at the back of the venue. Mr. Lipponen delivered his address to the seminar before giving the floor to President Bachelet. Mr. Lipponen also recalled the recession years of Finland and credited a consensual approach to politics as one of the factors in helping Finland out of the slump: a rainbow government, consensual by definition, at the time oversaw healthy measures such as cutting government expenditure and investment in education. Also the post-recession Finnish accession to the EU in 1995 received a tripartite mandate which was crucial for the whole accession process.

President Bachelet began her speech with a look at the present challenges of the Chilean economy but also at its achievements. As a result of free markets and trade Chile is now the most competitive among developing countries, and proud of having been recently invited to start OECD membership talks. Chile is looking to develop a dynamic economy. This goal is coupled with an equally important one: to include all Chileans across social and gender boundaries in this increasing prosperity. No trade-off needs to exist between economic development and social justice and welfare, the President argued. Finland is an inspirational example of this and Chile has the potential to be an equally good example and a model economy for the rest of Latin America. Chile needs to develop policies endorsing social security and benefits. In education policy the emphasis is right now shifting from quantity to quality: as education is beginning to be available for a great part of the population Chile must now improve the quality of learning. This message is topical as President Bachelet has recently been embattled with education issues at home. Massive student protests in 2006 demanded quality improvements in education and caused Bachelet to reshuffle her cabinet.

President Halonen concluded the seminar with warm words regarding the close relations of Chile and Finland and even indulged her colleague with a cordial sentence in well-phrased Spanish. 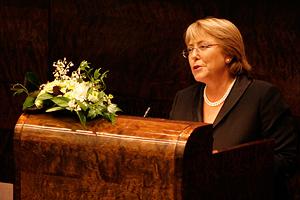 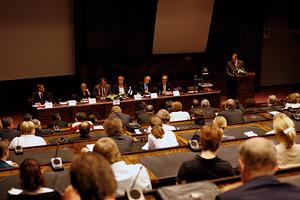 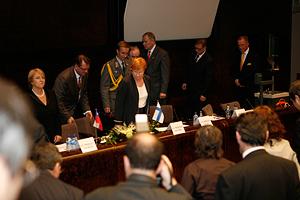