Central Asia is characterised best by strong sovereignty, a lack of regional governance structures, and external power political interests. Domestic civil societies and democratic structures are, in many places, under pressure. The US initiative under the banner of the New Silk Road, the question of China’s growing presence in the area with its ‘One Belt, One Road’ initiative, and the complex relationship between the countries in the region and Russia all combine to make the situation challenging and possibly tense. The area, rich in natural resources and with potential for the establishment of fruitful infrastructure between East and West, is thus relevant for many actors with considerable power. In this context the seminar will deal with the question of EU presence in Central Asia. Could the EU be seen as a balancing power? What possibilities are there for the EU to bind together the disparate forces at work in the area? What are the key priorities and tools of the EU’s Central Asia strategy?
Opening words: Teija Tiilikainen, Director, the Finnish Institute of International Affairs
Speaker: Peter Burian, EU Special Representative for Central Asia, the European Commission
Comments: Neil Melvin, Director of the Armed Conflict and Conflict Management Programme, Stockholm International Peace Research Institute (SIPRI)
Niklas Lindqvist, Roving Ambassador for Central Asia, the Ministry for Foreign Affairs of Finland
Chair: Juha Jokela, Programme Director, the Finnish Institute of International Affairs
Summary of the seminar:
Programme Director Juha Jokela opened the seminar by stressing that the EU at present needs to increase collaboration with other global actors in key regions, including with Russia in areas such as the Arctic. In Central Asia as well the EU aims to enhance its engagement and cooperation, even if geo-economic and geopolitical factors pose challenges.
Peter Burian, EU Special Representative for Central Asia at the European Commission, endorsed increased engagement of the European Union in the region, especially at a time when Chinese and Russian presence is growing. He listed a number of new challenges the region is facing, including security and radicalization, the economic downturn, the impact of climate change, and the ramifications of all these factors for general socio-economic development in the region. He stressed the importance of the EU’s recently updated strategy for Central Asia, which aims to promote stronger EU engagement in reform and modernization, while respecting local and regional ownership in achieving sustainable solutions to the challenges. Burian pointed out the following fields of cooperation: security issues, education, sustainable development including water management, the promotion of a favorable trade and investment climate, connectivity, and the support for resilience by protecting human rights and promoting the rule of law and civil society activities. He emphasized the role of Finland in concrete cooperation projects on the Rule of Law, education (including through Erasmus+), and environment/water management. He concluded by stating that the EU is a vital partner in enhancing stability and prosperity of the region. At the same time Central Asia needs to bring in other strategic partners, including in multilateral meetings on border security.
Neil Melvin, Director of the Armed Conflict and Conflict Management Programme at the Stockholm International Peace Research Institute (SIPRI) began his comments by stressing the tectonic changes in the region, impacted by security issues, leadership changes, and economic factors. He argued that since the mid-2000s, the EU has shifted its engagement from an emphasis on democracy promotion, technical assistance and conditionality, to a strategy focused on engagement and a security dialogue. This has posed challenges for the EU, as it lacks leverage, has to rely on demand and goodwill form the region’s governments, and on attempts to instigate a process of norms export and social learning. All in all, the EU has had limited ability to influence reforms. Melvin pointed out three reasons for this: a “dialogue with the deaf” (i.e. authoritarian governments) on human rights, democracy and media freedom; multipolarity and the presence of other actors (with Central Asian countries playing off these actors against each other); and the EU’s lack of clear objectives and weak implementation. The EU’s performance has thus been disappointing: little reform has occurred, and there may have even been a process of “reverse socialization” taking place. Only China has been able to advance its own agenda in Central Asia, and the 2015 revision of the European Strategy Document reflects the EU’s frustration as well as a new realism about opportunities in the region. He pointed out that the emerging bipolarity (the growing presence of Russia and China) in the region could bring new opportunities for the EU as a balancing power, if Europe can build up leverage, clearly define its strategic goals, and develop a shared vision for Central Asia. The EU now has more engagement, expertise, investment and diplomatic relations in the region. In order to avoid marginalization the EU should concretely focus on the promotion of openness in the field of connectivity (in the light of China’s focus on hard infrastructure); instigate a dialogue with Russia on conflict management, peacekeeping and peace-building in Central Asia; take into account the dwindling US interest and draw lessons from the recent US experience; and prepare for leadership change in the region. Most importantly the EU should define what it aims to obtain from its investments in Central Asia.
Niklas Lindqvist, Roving Ambassador for Central Asia at the Ministry for Foreign Affairs of Finland, outlined the Finnish bilateral engagement in individual Central Asian countries, in fields such as trade, fisheries, and water management, as well as in projects related to support for democracy and rule of law. He also emphasized Finnish involvement at the EU level, in the review of the EU strategy document, bilateral discussions, and high-level security dialogue. He argued the region poses four overarching challenges: stability and security (including internal stability and its effects on human rights), the effects of the economic downturn; the lack of regional cooperation; and the uncertain engagement of Iran in the region after the lifting of the sanctions. 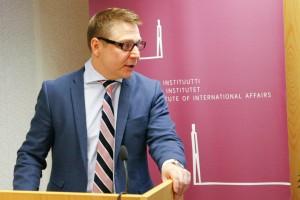 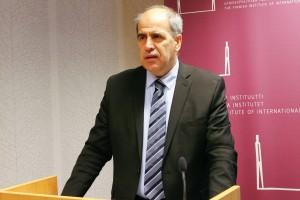 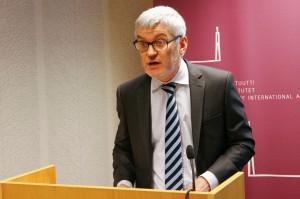 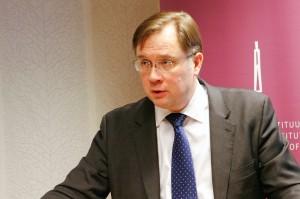 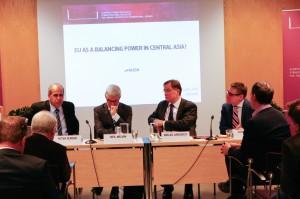