frontpage / Events / Fate Of Africa – Development Prospects and...
share
share
What is the impact of financial crisis on the development of Africa? What are the developmental forces on the African continent? Which sectors, regions or countries seem to be most prominent and what are the possible ’spill-over effects’ over to other sectors or regions?
Over the last decades there has occurred a massive long-term global shift of wealth. This shift of wealth has not been even and it has produced novel arenas of geo-political competition where Africa has received increasing attention. How is the escalating international competition, not only of resources but also of ’hearts and minds’ in Africa, affecting the development of Africa?
Keynote Speaker: Dr. Donald Kaberuka, President of the African Development Bank Group
Dr. Kaberuka is the President of the African Development Bank Group (AfDB) since 2005.  He served as Rwanda’s finance and economic planning minister from 1997 to 2005.  Prior to joining the joining the government Dr. Kaberuka had over 12 years experience in the Banking industry, trade, finance, international commodity business and development issues. He obtained his M Phil (Econ) and a PhD in Economics from Glasgow University, Scotland.
Comments: Ambassador Kirsti Lintonen
Ms. Lintonen served as Permanent Representative of Finland to the United Nations from 2005 to 2009. Prior to this she served as Under-Secretary of State as well as Finland’s Ambassador to South Africa, Botswana, Lesotho, Mauritius, Namibia, and Swaziland and was accredited to the Southern African Development Community. From 1996-2000 she was Finland’s Governor for the AfDB.
Chair: Dr. Matti Nojonen, Program Director, Transformation of the World Order Research Programme, Finnish Institute of International Affairs

Most attention to the economic impact of the financial crisis has focused on the developed world, although there is increasing awareness of its implications to the developing world. Dr. Donald Kaberuka, President of the African Development Bank Group and keynote speaker of the event, started his presentation, after chair Dr. Matti Nojonen’s opening remarks, by reminding the audience about the impressive growth of the African economy in recent years, until it was struck by the global financial downturn.

Africa’s development was struck hard by political mistakes committed in the 1960s, while the continent was engulfed ever deeper in Cold War rivalry, and the oil shocks of the 1970s exacerbated the situation. Furthermore, Africa’s increasingly urbanised society meant an increasingly political society, whereby African governments secured societal stability with cheap imported food, leaving the domestic agricultural sector underdeveloped. Since the late 1980s, however, African countries were trying to adjust to the Washington Consensus principles, and even countries with scant minerals and natural resources, like Malawi, were sporting impressive growth rates. Africa’s economy was gaining from improvements in organisational restructuring and greater interregional demand, spurring trade among African countries. Dr. Kaberuka raised Ghana as an example of an African country that, in just over two decades, has risen from political and economic difficulty to a model nation.

Since Africa’s role in the global economy is so marginal, at first the impact of the global economic crisis was expected to be equally marginal. However, although Dr. Kaberuka does not see Africa as having been hit by a financial crisis, he does think it has been reach by an economic crisis. A number of African economies depend on exports of a single commodity, like Nigeria and Benin, to major economies in the developed world, and have been affected by drops in demand around the world. While fiscal pressure is compromising official development assistance contributions to Africa, also remittances to Africa from African diaspora in the developed world, whose money transfers comprise a major part of many African economies, may decrease as a consequence of the crisis. Africa could still see modest GDP growth, but not enough to match its rapidly growing population. Still, whereas in many Western countries the present economic headwind has increased government intervention in the economy, African countries are pursuing an opposite course and promoting increased privatisation of companies – even banks.

Another point Dr. Kaberuka touched upon was the issue of global governance in determining the fate of Africa. People in the developed world ask themselves what “we” should do for Africa, but rather, the question should be how Africans themselves can determine their own continents future course. Developing countries still have far too weak a voice in global issues, and too many fragile states, suffering from economic hardship and substandard governance, are overlooked by aid donors, causing economic and, consequently, political imbalances and barriers between African countries. Africa is full of borders with more than 53 countries. Developing infrastructure, electricity grids and agricultural capacity in individual countries is one priority, but it is just as important to support and integrate the progressive business community of as many African countries as possible in order to integrate the fragmented and vulnerable state of Africa’s economy.

The seminar’s discussant, Ambassador Kirsti Lintonen, former Permanent Representative of Finland in the United Nations, ambassador to numerous African states and governor to the African Development Bank, began her comment by underlining the interlinked and interdependent nature of the world, stressing that this is not only an economic or political fact but, in the face of climate change and food shortage, a geographical one, too.

According to Ambassador Lintonen, much of Africa will continue to be affected by inconsiderate policy-making in developed countries. Although multilateral dialogue of a kind that incorporates poorer areas like Africa is on the rise, executive power, actual implementation and follow-up of the multilateral organisations is still underdeveloped. Forums like the G20 can be seen as a promising sign, but even the G20 lacks a secretariat. When policies do get implemented, they require adequate coordination and efficient use of resources, which is not always the case.

In development projects, greater emphasis should be put on an all-inclusive approach that reaches the poorest of the poor and also strengthens the position of African women, who are a great resource for an Africa struggling with economic hardship. Gender divisions remain stark, child birth mortality is high and maternal health is poor. When dealing with national building, ensuring political stability and launching development projects, it is important to learn from past mistakes. According to Ambassador Lintonen, however, we have not done our homework. Côte d’Ivoire’s turnaround from a blossoming economic powerhouse into a theatre of civil war in the 1990s is testimony of this.

Many of the questions raised from the floor concerned the motives behind the presence of external actors in Africa’s economy, especially that of China, and how the African countries and the African Development Bank Group are holding their own. Dr Kaberuka dismissed any naivety on the Africans’ behalf concerning China’s or the EU’s interests in Africa. Commercial interaction is welcome as long as the deals are equally beneficial for Africa. Fragile countries should be provided with consultation to strengthen their bargaining position. Some may think Africa’s economic rise being overdue already, but it is impending – the telecommunication sector is spreading and market laws dictate that Africa will be the next hotbed for manufacturing.

Furthermore, the role of African diaspora (also represented in the audience) in building Africa’s future was a central topic of discussion. Currently diaspora provide for family and relatives back in Africa largely by sending money home, but Africa direly needs the wealth of skills and know-how accumulated by Africans living abroad. Many African countries were originally reluctant to approve of dual nationality, but such attitudes are changing as a consequence of their current politically and economically precarious situation. 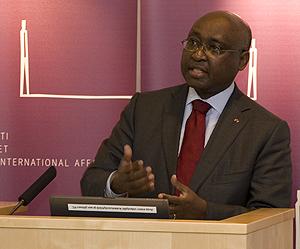 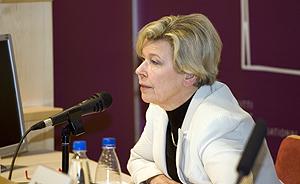 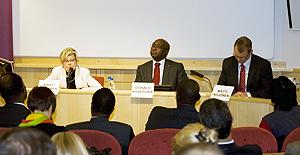