frontpage / Events / Foreign and Security Policies of Estonia and...
share
share
Estonia and Finland are faced with the same international environment, which has experienced a dramatic increase of uncertainty due to the Ukraine crisis. Their responses to the crisis have been different, reflecting the differences in their foreign and security policy traditions. Yet they share a fundamental interest in regional stability, western unity and a norms-based international order, and their cooperation and interdependence in the field of foreign and security policy are on the rise. Are the two countries moving closer together or drifting apart in terms of their foreign and security policies? What makes mutual understanding difficult at times? Can more be done to work together to advance common interests?
Opening remarks: Teija Tiilikainen, Director, the Finnish Institute of International Affairs
Keynote speech: Marko Mihkelson, Chair of the Foreign Affairs Committee, the Parliament of Estonia
Marko Mihkelson is a Member of the Estonian Parliament where he chairs the Foreign Affairs Committee and serves on the European Union Affairs Committee. He is also Head of the Delegation to the NATO Parliamentary Assembly. Mr. Mihkelson was first elected to the Parliament in 2003 and is currently serving his second mandate. Between 2000 and 2003 he worked as the Director of the Baltic Centre for Russian Studies. Prior to that, he was the Editor-in-Chief of the daily newspaper Postimees and from 1994 to 1997 he was Postimees correspondent in Moscow.
Comments:
Erkki Bahovski, Editor-in-Chief, International Centre for Defence and Security
Erkki Bahovski is the Editor-in-Chief of Diplomaatia at the International Centre for Defence and Security. Bahovski started his career in journalism at Postimees daily in 1995, serving as head of the foreign news desk, editor of Tartu Postimees and opinion page editor. From 2008, he took a position as media adviser at the representation of the European Commission in Estonia. Bahovski has also been active as a radio host, moderating the “Pressiklubi” programme on Kuku Radio and taking part in the Estonian Public Broadcasting programme “Rahva Teenrid” (Servants of the People).
Iivi A. Masso, Adviser to the President of Estonia
Iivi Anna Masso works as an Advisor to the President of the Republic of Estonia. She has also been the editor of the Estonian foreign policy magazine Diplomaatia. She has published academic articles in several Finnish and Estonian journals and books. Masso has worked as a freelance writer and policy analyst, and from 2001 to 2008, as a researcher and lecturer at the Departments of Political Science and Practical Philosophy at the University of Helsinki.
Jarmo Mäkelä, Journalist
Jarmo Mäkelä is a journalist who worked as Senior Diplomatic Correspondent for the Finnish Broadcasting Company’s (YLE) TV News. During his career at YLE, which started in 1981, he was stationed in Moscow, Bonn and Brussels. In 1997-2001 he served as the Press Counsellor at the Finnish Embassy in Washington DC. He has a M.Sc. from the University of Helsinki. He has also been a Fellow at the Center for International Affairs at Harvard University (1990-91).
René Nyberg, Ambassador
René Nyberg began his career at the Ministry of Foreign Affairs in 1971. He worked at the Finnish embassy in Moscow (1973–1975) and at the Finnish Consulate General in Leningrad (1976–1977). Nyberg served as ambassador for Finland’s permanent mission to the OSCE in Vienna (1992–1995), ambassador in Moscow (2000–2004) and ambassador in Berlin (2004–2008). He left diplomatic service in 2008 after he was invited to form an organization for promoting the interests of Finnish industry in Russia, the East Office of Finnish Industries. He served as East Office CEO from 2008 until his retirement in December 2013.
Kristi Raik, Acting Programme Director, the Finnish Institute of International Affairs
Kristi Raik is Acting Programme Director at the Finnish Institute of International Affairs. Prior to joining FIIA in 2011, she served inter alia as an official at the Directorate-General for External and Politico-Military Affairs in the General Secretariat of the EU Council and as a Visiting Fellow at the Centre for European Policy Studies in Brussels and the International Centre for Policy Studies in Kiev. She has published widely on European foreign policy, the EU’s enlargement and relations with the Eastern neighbours.
Chair: Mika Aaltola, Programme Director, the Finnish Institute of International Affairs
Summary of the seminar:

The seminar was opened by Teija Tiilikainen. In her short introductory remarks, Tiilikainen highlighted the timeliness of the seminar’s topic. She also expressed her expectation that the seminar would provide answers to two key questions: 1.) where do the similarities and the differences between the Estonian and the Finnish foreign and security policy stem from, and 2.) will the two countries be pushed closer together by the surrounding world which seems to present them with ever greater challenges?

Keynote speaker Marko Mihkelson concentrated particularly on the similarities between Estonian and Finnish foreign policies. In his view, Estonia and Finland have never been closer in the area of foreign and security policy than they are at present. Discussions between the two are, according to Mihkelson, unprecedentedly open, frank and focused. In Mihkelson’s opinion, this is partly due to the Ukraine crisis. The Ukraine crisis is, however, only a symptom of larger trends in Russian thinking: Russia now perceives its western neighbours increasingly as a challenge. According to Mihkelson, this is evident in Russian propaganda, Russia’s support to dubious European politicians and the country’s frequent demonstrations of power. In Mihkelson’s view, both Estonia and Finland are frontline states in the current confrontation and should work together towards creating a more secure Nordic-Baltic region. The cooperation should involve more consultation and information-sharing between the two countries, the formulation of common positions in Brussels and active participation in the discussions surrounding the potential revision of the European Security Strategy. Finally, Mihkelson underlined that the Estonian foreign and security policy is based on a strong domestic consensus and that the parliamentary elections of March 2015 are thus unlikely to have an impact on the Estonian positions.

Erkki Bahovski started by underlining the closeness of Estonia and Finland. Particularly Estonia’s accession to the EU (and the eurozone) and the flow of labour migrants from Estonia to Finland have pushed the two countries ever closer during the last ten years. However, with regard to their foreign and security policies, some differences remain. Estonia, for example, supports the view that every country has the right to choose which international organisations it wants to belong to. In other words, Ukraine should be equally free to opt for NATO membership as Finland, which frequently refers to its NATO option. However, this line of reasoning is foreign to most Finns. At the same time, Finns often perceive comments coming from Estonia as unnecessarily provocative and ‘hawkish’. According to Bahovski, a broader analysis of these comments would, however, actually reveal that Estonian politicians have refrained from using overly tough language towards Russia in the context of the Ukraine crisis. In Bahovski’s view, the main source of the mutual misunderstandings is the lack of knowledge in Finland about Estonian history and vice versa.

Paraphrasing a 2008 article by Estonian president Toomas Hendrik Ilves, Iivi Anna Masso pointed out that all small countries, especially those that are situated next to a big country, should remember that ‘when international agreements break down, the big states do what they want and the small and weak states do what they must’. It should thus be in the interest of both Estonia and Finland to work towards a world in which international agreements matter. Despite their shared interest, differences between Estonia and Finland are, in Masso’s view, clearly visible. Most notably, there is strong pressure coming from within Finland to return to ‘business as usual’ with Russia, i.e. to drop the sanctions. This shows that Finland thinks trade and politics can be separated. According to Masso, this may have been so during the Cold War days. However, today Russia uses trade as a means of politics, so trade relations always involve politics. Another topic Masso was very concerned about is how the language that is used in Russian propaganda (words such as nationalism, Russo-phobia, separatism) easily enters – and thus influences – the western European discourse. In a similar vein, Masso underlined that any debates about minority and nationality issues are a ‘slippery slope’ because they can easily be used to justify power politics.

In Jarmo Mäkelä’s view, the relations between Estonia and Finland are not at the level at which they should be considering the commonalities between the two. There are also clear differences between how the two countries deal with and perceive Russia. According to Mäkelä, two reasons are normally given to explain these differences: 1.) Estonia and Finland have different historical experiences and 2.) Russia treats the two countries differently. However, in Mäkelä’s opinion, both of these explanations are flawed. Instead, he highlighted the mistakes that have been made in the bilateral relations between Estonia and Finland: Finland’s initial hesitance to support Estonian independence, its tendency to lecture to the Estonians on how to organise their relations with Russia and its criticism of the way Estonia has conducted the negotiations over the Estonian-Russian border treaty. But mistakes have not been made only on the Finnish side. The Estonian press, in particular, has helped to cement a distorted image of the Finnish stance on Russia by frequently citing controversial Finnish commentators whose influence over the Finnish debate is in reality negligible. The mutual misunderstandings are particularly evident in the debate about the possibility of Finland’s accession to NATO. The Finns have failed to understand that Estonians have very good and legitimate reasons to promote Finnish NATO membership. The Estonians, on their part, have failed to understand that Finns often interpret the Estonian support for Finland’s accession to NATO as a sign that Estonians doubt Finland’s capability to deterrence.

Also René Nyberg acknowledged that the Finnish-Estonian relationship has its difficulties. Ill will exists on both sides and the press has had a central role in causing irritation. However, all in all, the relationship between the two countries is, according to Nyberg, close and this has been taken note of in Moscow. Moving to an issue that caused the latest controversy between Estonia and Finland, Nyberg commented on the proposal by Great Britain, Denmark, Estonia and Lithuania to counter Russian propaganda by EU-level measures. In his opinion, support to Russian-language national media in different European countries would be the key here, not the formation of an EU-level organ. Finally, Nyberg expressed regret at the current shape of the Estonian border guard. Originally modelled after the Finnish border guard system, the Estonian border guard has, in Nyberg’s opinion, been neglected since Estonia’s accession to NATO, as Tallinn has become more concerned about being able to participate in NATO operations than about territorial defence.

Kristi Raik argued that the Ukraine crisis has pushed Estonia and Finland closer together, but also caused misunderstandings. In order to avoid such misunderstandings in the future, Raik offered practical advice to both countries. Finland should: 1.) remember that Estonia’s history could have been its own history, not be arrogant and respect the lessons that the Estonians have drawn from their past, 2.) stop thinking that Estonia pushes Finnish NATO membership only out of selfish reasons; 3.) consider Estonia as an example that trade and tourism with Russia are not dependent on a special political relationship with the country. Estonia, on the other hand, should 1.) not take official Finnish rhetoric on Russia at face value, as the Finnish approach is not as naïve as it may sound; 2.) not be paranoid about bi-lateral contacts between Finland and Russia, as Finland is very interested in preserving the EU’s unity and will make that clear through bi-lateral channels as well; 3.) understand that Finland is serious when it talks about the security dimension of EU membership – Finland expresses that it both expects to receive assistance from other EU member states and is ready to provide it if need arises. 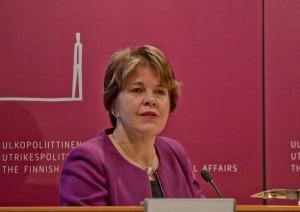 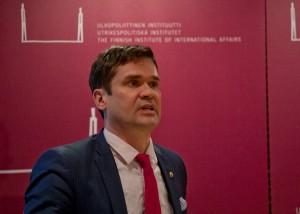 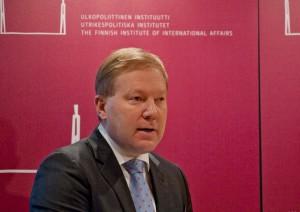 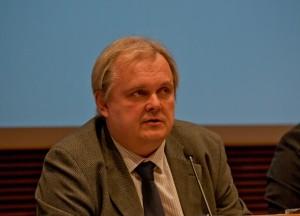 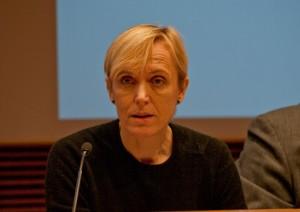 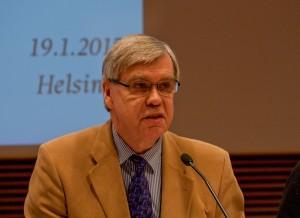 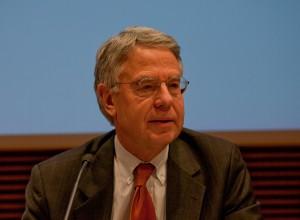 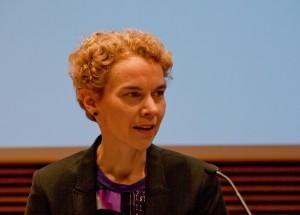 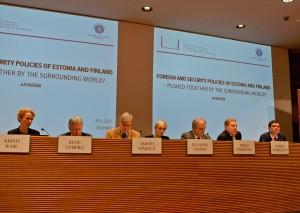 Full video recording of the seminar