In many current internal conflicts civilians are not just victims but often the very targets of those conflicts. What are the successes and failures of conflict prevention and conflict resolution? What is the resultant impact on the victims of conflicts? Humanitarian action aimed at protecting the victims and its links with political and military efforts in the midst of conflicts will be discussed in this seminar.

Ongoing crises in Darfur, Burma and Kosovo have brought the plight of civilians and humanitarian intervention increasingly under the spotlight. But how can humanitarian intervention best serve those who need it the most? This FIIA seminar, with keynote speaker Søren Jessen-Petersen from the NGO Independent Diplomat, tackled the complex linkages between humanitarian conflicts and the wider political and military situation.
Jessen-Petersen was concerned over the fate of the victims of conflict. They, as well as much of Jessen-Petersen’s core argument, are the topic of his upcoming book (Flight and Freedom). In addition to being those who suffer the most, they are also those who are not properly represented in peace negotiations. He was also worried about the failure of conflict resolution and prevention institutions to adapt to new types of conflicts.

Above all, there is a “huge gap” between the conference rooms and the realities on the ground. Most contemporary conflicts are messy internal ones, and in these conflicts civilians are often the targets. No longer are conflicts clearly delineated by state borders but bypass borders with regional consequences: failed states, refugees, spreading conflicts. These conflicts also tend to become protracted, making a return to peace even more difficult. Often the final result tends to be polarization and permanent division. Jessen-Petersen adeptly drew and numerous and varying examples to highlight his point. The nature of conflicts has changed and this poses a serious threat.

Unfortunately, institutions have not developed in pace. Despite pausing to announce that he was a strong supporter of the United Nations, Jessen-Petersen did not spare critique. The UN Security Council (UNSC) is in dire need of reform, Jessen-Petersen declared. Currently, the UNSC reflects the old distribution of power and a focus on inter-state wars. Recurrently the UNSC hides behind the notion of non-interference and state sovereignty, even though there are clear provisions for overriding them. He blamed the permanent members of the UNSC for being the primary obstacle for reform.

This failure by the UN to act has potentially devastating consequences. Jessen-Petersen cited Kosovo as an example. The failure by the UN to act led to NATO’s controversial intervention, which was described as “not legal, but legitimate.” Even after the intervention the UN failed to follow-through with its promises to Kosovo, again prompting NATO to act in its stead. This sort of behavior was highly damaging to the credibility of the UN. Jessen-Petersen argued that as long as the UNSC fails to act, it will become “increasingly irrelevant.”

His acid criticism continued with regional organizations. The African Union has proven unable to deal with Darfur; the Arab League is “completely irrelevant” in the Israel-Palestinian issue; ASEAN “absolutely unwilling and incapable” in dealing with Burma. The EU is different, Jessen-Peterson noted, as it has resources and powerful members, but unfortunately the EU is divided too. With regard to the EU, Jessen-Petersen was especially concerned about Kosovo. He found the “lack of resolve” of the EU “deeply regrettable.” The EU has a long way to go to become effective in providing humanitarian aid.

Adapting institutions to new types of conflicts is the issue that most worries Jessen-Petersen. The costs of failure on civilians can be immense. However, there is some cause for optimism. Globalization has also led to improved communications and awareness, and in a way improved the ability to tackle these problems. Maybe a “lack of vision” is more to blame, than a lack of capabilities.

Chair Professor Raimo Väyrynen, Director of the FIIA, agreed with Jessen-Petersen’s key contention: conflicts are different today, this is hard to deal with and this requires different approaches – such as the notion of the responsibility to protect. Jessen-Petersen concurred, noting that it is sad that the “logic of war” has surpassed the “logic of peace,” and that this will remain so in many places until the ability to create peace has improved. He reiterated that political action is most important, and that military intervention should be the tool of final resort. The audience presented numerous questions varying from UNSC reform to feasibility of impartiality, but none questioned the basic premises of Jessen-Petersen’s argument. 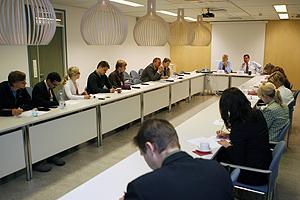 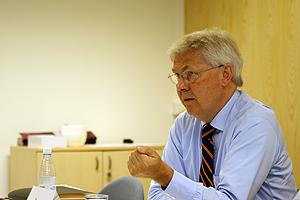 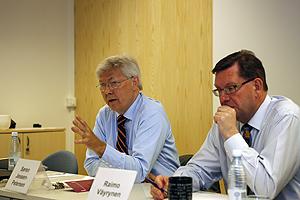