As a response to the challenges it is facing, the Russian leadership has switched to crisis mode. Protecting Russians from an outside threat has replaced rising living standards as the system’s main source of legitimacy. While the ‘internal mobilisation’ might improve the system’s resilience in the short term, the underlying structural problems remain unsolved. The seminar arranged by the Finnish Institute of International Affairs will try to address the questions whether or not the Russian system is capable of reforming itself, can the regime instrumentalise the crisis atmosphere in order to maintain its popularity and power and how sustainable the Russian system is.

In his opening remarks, Arkady Moshes noted that the seminar looks into three major questions: where Russia is today politically, where it is going, and what the trends are for the country’s future. He continued that the seminar also marks the launch of the new FIIA Analysis on Russia’s current developments, Zugzwang in Slow Motion. Of the four writers of the Analysis, two will speak in the seminar.

The next one to take the stage, Sinikukka Saari introduced the research project FIIA is conducting on Russia’s effects in Finland’s neighbourhood funded by the Prime Minister’s Office. The recently published FIIA Analysis is the first part of the project with more publications to come. According to Dr Saari, the Russian system has faced external as well as domestic setbacks that have forced it to react, and the ways in which it has reacted reflect the unique logic of the Russian system. For instance, in economic thinking, a conservative idea of “acceptable adaptation” to globalisation has gained popularity. This means that the Russian system is trying to respond to the economic hardships by increasing the role of the state and by underscoring the importance of strategic industries such as the military sector in order to create new economic growth and activity in Russia.

According to Dr Saari, the long-standing structural problems will remain unresolved and the regime is unable to address them. These problems include e.g. the lack of proper market mechanisms and rule of law, the uncompetitive and monopolistic economic system and social issues such as the population crisis, societal insecurity and poor public health. While the systemic problems remain, the regime is instrumentalising the current crisis atmosphere in order to secure and legitimise its power, Dr Saari argued. But as explained above, the real crisis stems from very different sources than the ones the regime is claiming. The solutions the system is implementing might be working for now and could strengthen the system in the short term, but the underlying problems will remain unresolved.

Veera Laine started off her presentation by arguing that the common narrative about the effects of the 2011-12 demonstrations in Russia needs to be challenged. According to her, the narrative claims that there was a liberal opposition on the streets in 2011-12, which scared the leadership and made it implement stricter control of the civil society, which in turn caused the civil society ceasing to exist.

Firstly, Ms Laine argued, the Bolotnaya protests of 2011-12 were not only about liberals demanding more democracy after the flawed Duma elections, but there were other groups among the protesters as well. They all wanted to have fair elections, but other common denominators were fewer. Secondly, the civil society does not equal liberal opposition, but it includes both ‘dissentful’ and ‘consentful’ organisations (according to the terminology of Luke March and Ammon Cheskin). The dissentful ones oppose the current system whereas the consentful ones support it and often receive funding from it. And thirdly, the control did by no means start after the 2011-12 demonstrations: there was control before but it has increased since.

Currently, there is fundamental uncertainty in the whole field of civil activities because of the new legislative measures concerning NGOs, the media, bloggers etc., Ms Laine argued. The laws are often loosely written and can therefore be interpreted differently in different cases. And if NGOs need to spend time proving they are complying with the laws, it takes resources away from their main activities and makes them inefficient. As a result the whole field of civic activity has become fundamentally uncertain.

All in all, the result of this tightening control is an internal mobilisation in Russia: the state is controlling what is acceptable behaviour, what is decent and what is patriotic. All conflicting ideas can be labelled as unpatriotic. The state is doing this in order to unite the people to support it and it blames external threats for the problems Russia is facing, while simultaneously brushing away the real reasons for the problems.

The last one to take the stage, Andrei Kolesnikov from the Moscow Carnegie Centre began by focusing on the Russian public consciousness. According to him, the main word for the Russian consciousness is currently ‘war’. It is used to justify the military expenditures, the decrease of the GDP and the narrowing space of liberty. Putin’s war is compensating the bad economic shape of Russia and the democratic insufficiency. According to Mr Kolesnikov, the war is important for president Putin because it helps him to maintain the ‘besieged fortress’ sentiment in Russia and uphold his own popularity: to be inside the fortress, you have to support the commander, the logic goes. There is even a kind of a Stockholm syndrome taking place in this regard, Mr Kolesnikov argued. But while the war is currently very popular in Russia, it needs to be remembered that the war is also creating inflation. Year-on-year inflation currently stands at 13 per cent and could rise to 15 per cent by the end of the year due to the sanctions against Turkey. And while the war rhetoric is indeed popular, the war is currently not a real war but rather a proxy war of some sort, because real war would be too much for the Russians to handle, Mr Kolesnikov reminded.

In accordance with the war talk, the west is portrayed as Russia’s main enemy. For example, it is common to blame president Obama for Russia’s economic problems, Mr Kolesnikov said. Domestically, enemies are portrayed in similar ways as in the Stalin era: the lexicon includes words such as the ‘fifth column’, ‘national traitors’, ‘foreign agents’ and the legal category of ‘undesirable organisations’.

According to Mr Kolesnikov, the Russian regime has skilfully taken advantage of public sentiments concerning patriotism. He argued that there was a demand in Russia for a patriotic development but the demand was dormant. It started to grow only when the propaganda was used to explain to the people that there needs to be patriotism. Before the patriotic sentiments woke up, the leadership tried pushing different buttons to activate it, but Crimea was the first “button” to work properly: it is the most forceful impact on public consciousness and opinion in all post-Soviet era and therefore a completely unprecedented event. For many people, Crimea was an easy excuse to join the majority: this was something almost all could support no matter what their previous sentiments about the regime were. But it needs to be borne in mind that Crimea has nothing to do with Russian nationalism. It is imperialism: the peninsula is not a Russian nor a Ukrainian territory but the recreated fragment of the former empire.

Summing up, Mr Kolesnikov argued that the Russian regime is currently merely providing tactical solutions to problems, but an overall strategy is lacking. According to him, declining real incomes and a deteriorating economy have already become a ‘new normal’ that Russians are trying to accommodate to. Russia seems to slowly stagnate and deteriorate more and more and it is absolutely certain that Putin will not liberalise or democratise the system. Currently he is simply postponing solving the problems Russia is facing. One of the biggest issues is the population crisis: there are less and less future parents and more and more future pensioners among the Russian population. It is estimated that in 2030 there is already one pensioner per one working-age person in Russia, and the pension system could collapse as a result, Mr Kolesnikov concluded. 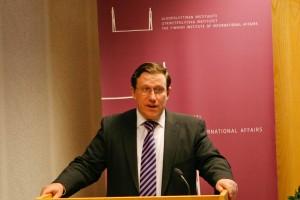 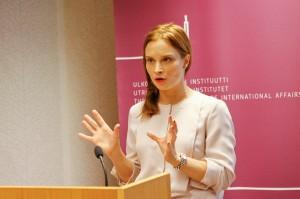 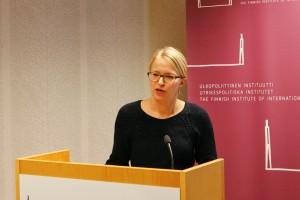 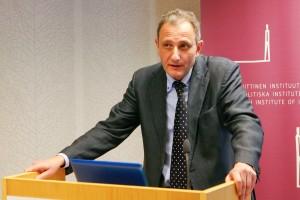