The regional security environment in East Asia is rapidly changing. From the perspective of Japan, China’s increasingly assertive stance and military expansion, especially its naval ambitions, are creating instability in the region. This lecture will discuss the role of the U.S.-Japan alliance in the context of four issues, relating to: (1) the regional power balance, (2) the Chinese naval strategy, (3) the Taiwan Strait, and (4) the East and South China Seas. The lecture will be followed by informal discussion and Q&A.

Speaker: Prof. Tomohito Shinoda, International University of Japan, Niigata.
Professor Shinoda obtained his PhD in International Relations from the Paul H. Nitze School of Advanced International Studies, the Johns Hopkins University in 1994. He has published widely on Japan’s political leadership, Japanese foreign relations and the US-Japan alliance. He is currently a Visiting Professor at the Swedish Institute of International Affairs.

Dr Bart Gaens, researcher at the Finnish Institute of International Affairs, opened the seminar. He began by stating that China’s growing economic weight and the country’s increasingly assertive stance in regional affairs are changing the security environment in East Asia. As a result of China’s rise, also Japan has become much more active in the region. Despite efforts to take a more independent course in recent years, the US remains a corner stone in Japan’s Asia policy. It is vital to have a solid understanding of Japan’s role in the region and in particular of Japan’s relations with China. Dr Gaens welcomed Professor Tomohito Shinoda from the International University of Japan, Niigata, to speak in the seminar about the US-Japan alliance and China.

Professor Shinoda started by introducing the US-Japan alliance, which has significantly changed over time. At origin it was a marriage of convenience. After the Cold War the US and Japan needed to redefine their alliance and it needed to serve as a public good. The countries concentrated on international peacekeeping, anti-terrorism, nuclear proliferation, international order in East Asia and global commons. Also in the 1990s, the US served to control the global commons, however, now the world order is becoming more multi-polar. There are an increasing number of challenges that are threatening the global commons, including cyberspace attacks, network intrusions, piracy, anti-satellite weapons tests and space-faring nations. Also, the US strategy is changing from unilateralism to multi-lateralism, and as Professor Shinoda pointed out, it is changing towards smart power, meaning a mixture of hard power and soft power.

Professor Shinoda argued that at present in the East Asia region, the US-Japan alliance aims to serve as a counter balancer vis-a-vis China. There is a concern towards the DPJ government and China’s assumption on Korea. Discussing what Japan should do as a balancer in East Asia region, Professor Shinoda said that Japan should practice value diplomacy, have an explicit declaration of standpoint, have a clear common strategy with the US, participate in TPP (Trans-Pacific Partnership) and invest in trilateral efforts (US-Japan relations with Australia, India and Korea). In 2010, Japan’s Defense Guideline was published, marking a major shift in defense policy from the north, the Cold-War Soviet Union border, to the south.

Next, Professor Shinoda addressed the Chinese maritime strategy. In 1985, the Active Defense Plan was approved and the coastal defense was changed to offshore defense. In 2010, South China Sea as well as East China Sea became core interests for the Chinese government. Wen Jiabao pointed out to Prime Minister Noda in 2012 that Japan should respect China’s core interest. Regarding this, Japan should take notice of the regional crisis law, which was defined in 1999, but no details have yet been specified. Japan should also improve the interoperability with the US, reconfirm the significance of the South China Sea and clarify its role as a balancer. Japan should also develop a program about confidence building in the region, cooperate in the region based on the Pacific Partnership 2010, practice medical cooperation in Cambodia and Vietnam, as well as participate in disaster emergency training.

Professor Shinoda thereafter took up the issue of the Senkaku Islands. He presented the history of Senkaku, of which control has been contested. He stated that in the investigations in 1885 no traces of Chinese control were found and in 1895, the island was officially declared as part of Japan. In 1945, Senkaku Island became under administration of the allied powers and in 1952 under US control, which China never contested. Only after natural resources were found in the area, China started to claim that it is part of the country. In 1972, Chinese and Japanese relations normalized and Japan continued the administration. However, now that China’s power has risen and the importance of ocean resources has increased, the situation has changed. In 2010 the first Senkaku island incident occurred, followed by the second in 2012. Professor Shinoda stated that the roots of these issues were the failure of the DPJ government and Japan’s internationally weakening power. In the end, Professor Shinoda noted that the DPJ government is not 100 % committed to US-Japan relations. It is now a turning point for Japan, at a time when they need to decide whether they want to stay as a tier-one nation or not.

In the question and answers session the discussion on the US-Japan alliance continued. Professor Shinoda stated that Prime Minister Noda is committed to the alliance, but this requires also political leadership to promote certain programs, and the national guidelines should be fulfilled. It is important to achieve a top level of trust between Presidents Obama and Prime Minister Noda. It was also discussed that a certain kind of political thinking needs to be established in regarding the East Asian community, although it will be very difficult. Countries have very different cultural backgrounds and standards of living. The East Asian community has no collective security, like NATO. Professor Shinoda stated that the EAS (East Asian Summit) is more a network that can act like a community in the region. He also noted that Russia’s role in the region has changed since President Putin returned to power. Some argue that Japan can now improve the bilateral relations and it could be possible to have some progress on territorial issues with Japan.

Also the EU’s role in the region was discussed. Professor Shinoda said that the EU can be influential in the region and play an important role in regional issues in East Asia. It has more objective opinions than the US. Professor Shinoda also highlighted the issue of freedom of navigation in the South China Sea, which is in Japan’s interest and which in his opinion should be discussed multilaterally. 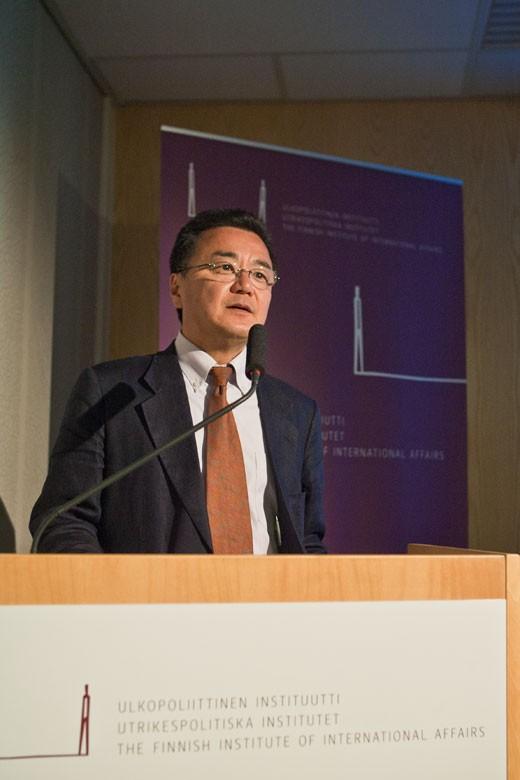 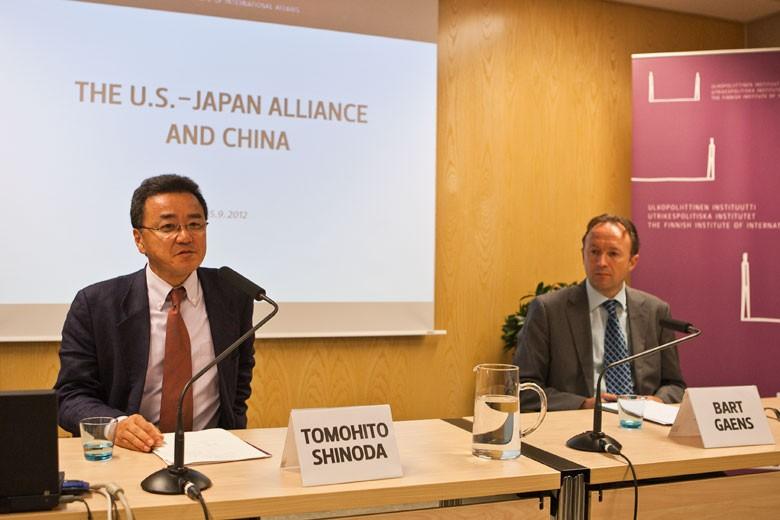