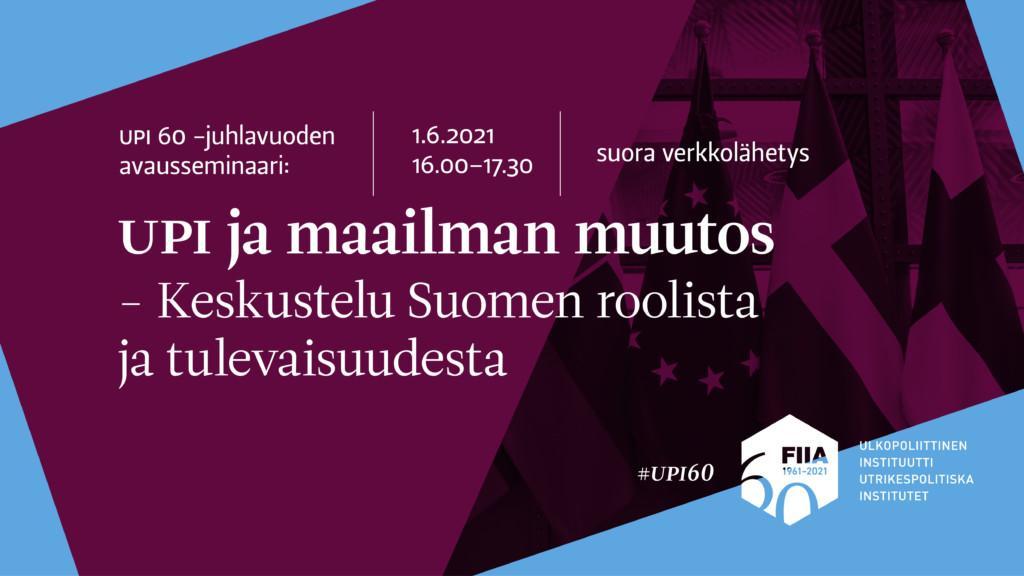 This year the Finnish Institute of International Affairs (FIIA) celebrates a double anniversary. The Institute was established by the Parliament of Finland in its centennial plenum in June 2006. From 1961 to 2006 FIIA functioned as an independent research institute run by a private foundation.

The Institute’s theme year starts on the 1st of June, 2021 with a seminar: FIIA and the changing world – a discussion of Finland’s role and future. The seminar speakers are Under-Secretary of State Kai Sauer, former Prime Minister Paavo Lipponen, Director Mika Aaltola and Senior Research Fellow Sinikukka Saari. The speeches are followed by a panel discussion on the theme Finland in the world in the 2030s. The panelists are FIIA’s researchers Mariette Hägglund, Veera Laine, Katariina Mustasilta and Matti Pesu. The discussion will be moderated by Head of Research Communications Maria Annala. The seminar (in Finnish) will be livestreamed at 4.00–5.30 pm.

The main event of the anniversary will be FIIA Forum later in the autumn where the discussion on themes relevant to Finland’s foreign policy will be continued.

The Finnish Institute of International Affairs was established in 1961 to provide and to interpret information on global politics for the Finnish audiences. The Institute was maintained by a private foundation until 2006. In conjunction with its centennial anniversary, the Parliament decided to establish an institute to conduct research on international relations and the EU. The Parliament also provides the Institute’s basic funding. The Institute is autonomous in its research activities and is governed by a nine-member board, assisted by an advisory council and a scientific advisory council.

The Finnish Institute of International Affairs produces high-quality research for use by the academic community and decision-makers, as well as the general public. The Institute’s mission is to produce relevant, evidence-based information of a high academic standard on foreign policy, international relations, the international economy, and the EU. FIIA publishes Ulkopolitiikka (The Finnish Journal of Foreign Affairs) which also celebrates its 60th anniversary this year. The FIIA library is a specialized facility that supports the Institute’s research activities and whose collections are at the disposal of anyone interested in international relations and foregn policy. FIIA maintains an online archive called Eilen, which includes speeches and key documents related to Finnish foreign policy. FIIA is an international work community. There are around 60 members of staff altogether, more than 40 of whom are researchers. FIIA’s publications and events can be found on the Institute’s website https://www.fiia.fi/en/.