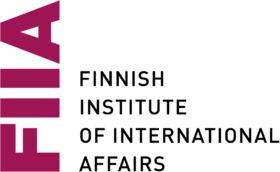 The Finnish Institute of International Affairs has launched an extensive research project on Finnish foreign and security policy, with the aim of strengthening the expertise and research in this field. This year, the project will focus on Finnish-Swedish cooperation in the domains of defence policy and civil preparedness. In addition, the decision-making practices and strategic culture of the two countries will be examined.

Besides publications, the initiative will include a tour of Finland and a series of seminars in key capitals abroad. Already this spring, FIIA will be on the ground in Finnish university cities, discussing questions of foreign and security policy with students and researchers.

Finnish foreign policy has been studied at FIIA before, but this year the theme is elevated as the Institute’s flagship initiative in response to a growing demand.

“There has long been a worrying trend where interest in Finland’s foreign relations and in a Finland-centered analysis of international affairs has waned. Finland’s special characteristics and interests have not been fully recognised during the period of its EU membership”, FIIA Director Mika Aaltola notes.

According to Aaltola, world politics has evolved in such a direction that Finland needs to develop its statecraft in order to cope in the changing global environment.

The international institutions, rules and practices built after World War II are being challenged from many sides. Russia’s authoritarian political system and great-power politics emphasising military capability are undermining the European security order. In Europe, the change of the liberal world order is coupled with the internal struggle of identity politics, eroding the common value base, causing political turmoil and bolstering extremism.

“Finland needs a pluralistic national security community, where experts ranging from policy-makers to academics, media and civil society engage in dialogue on Finnish policy lines, the current state of the security environment and the country’s national interests”, Aaltola says.

See also the webpage of the project.