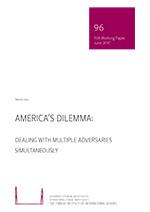 While the US had one principal adversary during the Cold War, it has come to face several largely separate ones in the post-Cold War era: Russia, China, North Korea, Iran, and Sunni jihadists such as Al Qaeda and Islamic State. Focusing on all of these at the same time is a very difficult, if not impossible, task for America. Dramatic events as well as limited resources and attention spans often lead to an administration focusing on one such threat in particular at any given time. Doing so, however, may lead to inattention to, or underestimation of, the threat posed by other adversaries, thus allowing them to grow stronger.

This Working Paper provides a basis for understanding and addressing this issue by examining three key components of it: 1) how America’s main adversaries pose a threat to American interests; 2) how different American allies identify and prioritize the threats that they face; and 3) how different American adversaries identify and prioritize the threats that they face (including those they perceive as coming not just from America and its allies, but from other sources, including one another). In light of this, the study will conclude by offering a set of guidelines for the US to keep in mind when dealing with multiple adversaries simultaneously, paying special attention to the need for the US to manage relations with its many allies, who often prioritize the threats they face differently from one another.