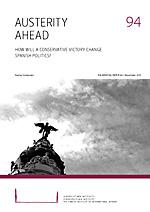 The electoral defeat suffered by the ruling Socialist Party (Partido Socialista Obrero Español, PSOE) in the municipal elections and the prolonged financial crisis has forced Prime Minister Zapatero to call an early general election on 20 November.

The Conservative People’s Party (Partido Popular, PP) is ahead in the polls by a clear margin and is likely to gain an absolute majority in the parliament.

The economic outlook for Spain looks bleak, which means that the new government will have to create new jobs quickly and push through harsh and unpopular reforms, particularly regarding the fiscal and administrative structures.

The Indignados protest movement is gaining support, and looks set to challenge the legitimacy of the system and force the future government to produce speedy results.

Spain is expected to enhance its role in international politics through pragmatic bilateral relations. In particular, relations with the US seem to be warming up, while Spain can turn to the UK and Poland in the EU for companionship.