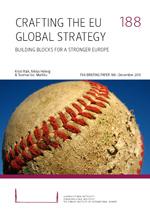 The European Union is preparing a new global strategy on foreign and security policy, to be presented by its foreign policy chief Federica Mogherini by June 2016. The success of the new strategy will depend on its ability to regenerate commitment to a common foreign policy among member states.

Compared to the European Security Strategy of 2003, the regional and global context is far less favourable today. The vulnerability and insecurity of today’s Europe are pushing Europeans closer together.

The EU’s value-based agenda needs clear priorities. At the same time, the EU should defend European security and the norms-based global order in a manner that seeks to engage different types of regimes.

The strategy should send a clear message that the EU’s security and defence policy, in all its forms, is about providing security for the EU and its citizens. The EU is unlikely to be directly involved in the territorial defence of its member states, but it contributes to Europe’s security by a variety of means, ranging from diplomacy to strengthening the defence industrial base.

The refugee crisis is the latest, stark reminder that it is necessary to strengthen the Union as a ‘comprehensive power’ able to draw on a variety of tools in a flexible, goal-oriented manner.

Europe’s changing security landscape: What role will the EU play in security and defence?

European Defence Under Scrutiny: What can be expected from the European Council?