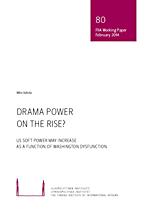 Models of soft power have failed to take fully into account the changes in and appeal of contemporary forms of globally disseminated popular culture.

Paradoxically, the recent episodes in the Washington drama may captivate and ‘entertain’ global audiences because of the changing expectations cultivated by the wide dissemination of American media forms.

The modes of popular culture in the US and globally are transforming, greatly influenced by developments in the American media and film industry. This has led to the emergence of new types of drama formats, such as reality TV, and a new type of fame and celebrity-based status, which have not been considered in the models of soft power.

Cyberspace and social media reinforce these new tendencies. In addition to changing the way authenticity and authority are understood, the new ‘viral’ form of information sharing is strengthening the need for political drama.

Celebrity culture – the notion of famous for being famous – blends with political crises, rendering the rise and fall of political parties and figures attractive and entertaining. It is suggested that the US as a state enjoys such a fame-based status.

In effect, US politics has drama power that mitigates the negative effects of controversy, polarization, and paralysis in Washington.