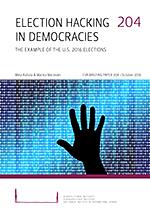 The US, as a highly digitalized state, depends on different cyber platforms for election campaigning, political discussions, forming popular opinions, and – in some cases – the voting process itself.

Geopolitically motivated election hacking can aim to influence the direction of foreign policy debates, to promote/demote candidate(s), and to instigate disruptions, suspicions, and distrust towards the election process or the democratic system. The strategic aim to lower democratic appeal and increase the attraction of autocratic “stability”.

A state sponsor of hacking can demonstrate that it has sophisticated cyber capabilities, thereby promoting its own major power standing. Even if its efforts raise suspicions, it gains visibility, as its efforts are discussed in the media and it manages to insert itself into the election discussions.

The state sponsor can subtly promote the images of its own type of political system as being comparatively more resilient and stable than the US democratic system.

The Global Arctic: The Growing Arctic Interests of Russia, China, the United States and the European Union