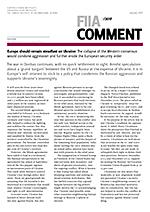 The war in Donbas continues, with no quick settlement in sight. Amidst speculation about a ‘grand bargain’ between the US and Russia at the expense of Ukraine, it is in Europe’s self-interest to stick to a policy that condemns the Russian aggression and supports Ukraine’s sovereignty.