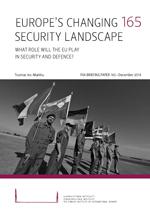 The Ukraine crisis has reminded Europeans of the importance of defence policy, thus amplifying the main message of the December 2013 European Council on security and defence.

Many of the proposals put forward by the December summit are currently being worked on, but the Ukraine crisis creates additional challenges for the EU, highlighting the strategic divergence within the Union and posing fundamental questions about its role as a security provider.

Regarding concrete achievements, the EU’s defence ministers recently adopted a policy framework for systematic and long-term defence cooperation, and the Commission has also begun to work energetically towards achieving its key objectives in the defence sector.

Ultimately, however, the success of the EU’s efforts will depend on the commitment of the member states.

Will the EU road open for Kosovo as well? The agreement between Serbia and Kosovo on the dispute over Kosovo’s name raises hopes of bringing Kosovo closer to the EU