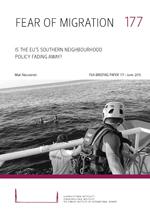 The conflicts in Syria, Libya and Iraq have spread instability and insecurity in the EU’s southern neighbourhood, and increased the number of migrants attempting to make their way to Europe with dramatic consequences at sea.

As a consequence, the EU has responded to the increasing migration pressures by attempting to control migration by increasing sea patrols and also by reviewing its neighbourhood policy.

The EU’s neighbourhood policy (ENP) is dominated by an agenda aimed at controlling migration towards Europe, which was not the original purpose of the policy. Europe’s Southern Mediterranean partners, unwilling to police the migration efforts, have requested the EU to increase the means for legal migration.

Currently, the EU is preoccupied with plans to launch military operations targeting traffickers, to further increase patrols and to share the burden originating from the southern migration more equally among the member states.

Relatedly, the ENP seems to be fading away, much like the general policy framework for the EU response to the developments in its southern neighbourhood, as the envisaged EU action is largely taking place outside of it.

Whether within or outside the ENP, the EU needs to improve its response to its Southern Mediterranean partners’ interests and priorities in order to maintain the special relationship with them.

What future for the Union for the Mediterranean?