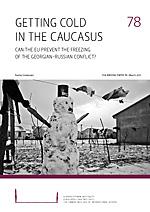 Since the stabilization of the Georgian-Russian conflict, no further progress has been achieved and the conflict is in danger of freezing again.

Leaders on both sides are taking full advantage of the tension that exists between them, while the people living on the boundary line are paying a heavy price because of the conflict.

The EU has assumed considerable responsibility for the resolution of the conflict, but due to insufficient coordination at the operational level and a lack of coherent political support, it has been increasingly ignored by both parties.

The Georgian-Russian conflict offers a great window of opportunity for the EU to define its overall strategy for the conflict management it so desperately needs.

The new Minsk ceasefire: A breakthrough or just a mirage in the Ukrainian conflict settlement?