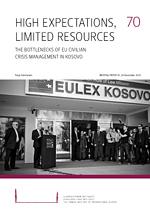 The EU Rule of Law Mission, EULEX Kosovo, is the biggest and the most expensive operation ever conducted under the CSDP. It was warmly welcomed by the Kosovo population in 2008, but it has proved difficult for the EU to live up to the high expectations.

EULEX suffers from a number of political constraints, as not all EU member states have recognized the independence of Kosovo.

International coordination in Kosovo is particularly complicated as the international actors live in parallel realities when it comes to the status of Kosovo: some recognize its independence, some do not, and others are status neutral.

Constant evaluation shows that the Kosovo rule of law institutions are steadily developing under EULEX monitoring and mentoring, but in key areas such as the judiciary and the fight against organized crime the progress is slow.

The crisis in Ukraine is not over: Any euphoria or triumphalism would be inappropriate