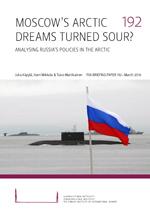 Russia has major economic, security and governance interests in the Arctic region. Russia’s key role in the region means that international Arctic cooperation without Russian participation is a non-starter.

High hopes concerning hydrocarbon and maritime prospects in the Russian Arctic have come up against complex challenges. Considering the general lack of reforms in Russia, Arctic developments will most likely continue, but they will be slower than expected and non-linear in nature.

Russia’s focus in the region has shifted towards hard security issues. While one should not be too alarmist, improved military capability combined with general uncertainty about Russia’s intentions indicates that the security situation has worsened.

But as Russia’s Arctic economic ambitions have become more difficult to realise and the country’s leadership relies on exceptional measures in domestic and foreign policy, there is growing concern about the future of Russia’s Arctic policy and Arctic cooperation in general.