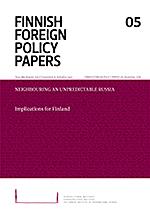 One of the main goals of Finland’s foreign and security policy, according to the government’s current strategic programme, is to secure Finland’s independence and territorial integrity, as well as to improve the security and welfare of its citizens. Finland seeks to maintain and develop both bilateral and multilateral relations, and in this way, to maintain room for manoeuvre in its foreign and security policy. This can be seen as Finland’s historical dilemma: neighbouring Russia but now a part of the West, Finland’s room for manoeuvre is not self-evident, and indeed requires constant management.

Russia’s foreign and military policy goals have not changed, but the means to achieve those goals have. Russia is more prepared than before to use military power to secure its political, economic and security interests – this applies both to Russia’s military capabilities and its readiness to use them. In addition to military power, Russia is increasingly using a multitude of non-military means to pressure others, both in wartime and peacetime.

Considering the comprehensiveness of Russia’s actions, it is of the utmost importance for Finland to invest in two things above all else: in strengthening its own society, and in international cooperation. This means increasing society’s crisis tolerance and resilience, ensuring the readiness and ability to act of the political and administrative leadership of the country, updating the legislation, and investing in defence and intelligence. It is difficult to overestimate the importance of international cooperation for Finland. By itself, Finland is vulnerable, but together with the Nordic countries, the EU and with its other Western partners, Finland is better protected.

At the same time, it is necessary to maintain bilateral relations with Russia and to develop them in those fields where it is possible, simultaneously considering the risks posed by Russia’s changing behaviour. It is in Finland’s interests to promote a united and realistic common EU policy. Contrary to the common perception, these two approaches for Finnish foreign policy are not mutually exclusive but rather mutually complementary.

No zero-sum game among EU foreign policy actors: Germany’s leadership in the Ukraine crisis has strengthened the Union