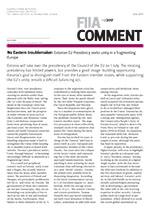 Estonia will take over the presidency of the Council of the EU on 1 July. The rotating presidency has limited powers, but provides a good image-building opportunity. Estonia’s goal to distinguish itself from the Eastern member states, while supporting the EU’s unity, entails a difficult balancing act.