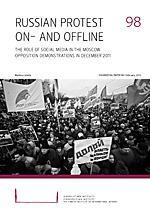 Social media played an important role in the Moscow opposition demonstrations in December 2011, functioning both as an alternative arena for public debate and as a tool for mobilising the protests. In a matter of months, the political atmosphere in the country changed and the legitimacy of the Russian power vertical was called into question.

Even before the Duma elections in 2011, social media had turned into an alternative forum for political debate in Russia. These media frayed the image of United Russia and Vladimir Putin, politicised new audiences, and helped to form both a collective ‘anti’ identity and networks among the protesters.

The reports of the falsification of the Duma elections circulated through social media channels and exploded into anger on the part of the betrayed voters. Social media were put to good effect when making the practical arrangements for the protests, such as financing the street demonstrations and recruiting participants.

Albeit crucial in mobilising discontent, social media is less well-suited to building lasting political structures. In the longer run, the conflict-torn opposition has to transform the protests into offline organisations and decide, among other things, who can represent the street protesters in negotiations with the power-holders.

Imposing strict internet control in Russia does not seem likely since the Russian urban middle class is accustomed to seeking information and expressing itself freely on the net. Removing this freedom would lead to an increase in anti-government sentiments and the intensification of protests in big Russian cities.