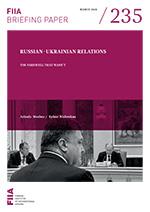 The “Revolution of Dignity” led to a considerable decrease in Russian economic, political and soft power influence over Ukraine. Yet the process did not turn out to be self-sustainable. Insufficient reforms and the predatory behaviour of old elites negatively affect the prospects for change in general and the emergence of a new model in Russian-Ukrainian relations in particular. Russia may exploit opaque schemes to gradually regain some of its lost positions in the country. The presidential and parliamentary elections of 2019 might result in the explicit re-establishment of Moscow’s leverage over Kyiv.

There is a risk that Western conditionality will increase the temptation to “normalize” the relations with Moscow for certain interest groups within Ukraine, including the ruling elite. Portraying this conditionality as an incursion on Ukraine’s sovereignty has already become a part of national discourse. Western decision-makers should be aware of the risk, but this should not become a reason to abandon a principled stance on Ukraine’s reforms.

Three Years after Euromaidan: Is Ukraine Still on the Reform Track?

Donbas is becoming a no-man’s land: Pressures to freeze the status quo are rising