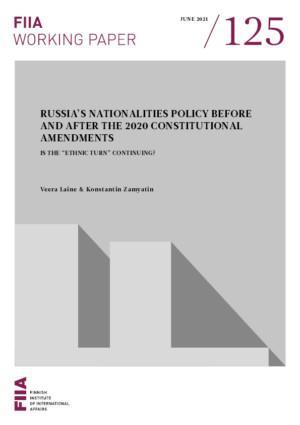 In January 2020, Russian President Vladimir Putin proposed a set of constitutional amendments, aiming to secure the continuity of his power in the years to come. At the same time, the amendments allowed ideological visions on national identity to be inscribed in the Constitution.

Since summer 2020, the Constitution has enhanced the symbolic status of the Russian language, which is now not only the state language but also the language of those who speak it (i.e. of “ethnic” Russians or “Russian-speakers”), implicitly referred to as the state-founding people. These provisions, together with support for compatriots abroad, not only continue the turn observable since the 2010s in Russia’s nation-building from a civic vision towards an ethnic vision of nation, but also challenge the existing interpretations of state borders. The provisions on safeguarding the “historical truth” and establishing a single framework for education hinder the republics from pursuing their identity policies.

This Working Paper argues that the amendments both adjust the earlier changes and signal new ones in the official discourse and nationalities policy.

The Covid-19 pandemic in Russia: No applause for Putin’s political play?