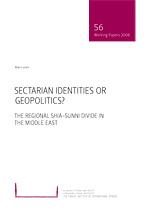 The purpose of this study is to enhance understanding of the new geopolitical situation currently unfolding in Middle Eastern politics that has emerged since the onset of the United States-led wars in Afghanistan and Iraq. The paper focuses on the notions of the Sunni-Shia divide and the Rise of the Shia.

In this study it is argued that the present dynamics of the regional-level Sunni-Shia divide are reinforced and catalysed by both geopolitical considerations and the national security interests of states. History and identity alone are not sufficient to explain the logics of the divide at the regional level. The study seeks to explain how and why geo- and power politics reinforce the present-day sectarian divide in the Middle East. It also suggests that the divide has the potential to become an era-defining feature of the post-Saddam Middle East in the way pan-Arabism and pan-Islam have defined the past decades of the region.

The study takes as its point of departure the division of Middle Eastern politics into two levels of analysis: the domestic level and the regional level. Different kinds of geopolitical readjustments and power balancing take place at the two levels, on which different fault lines can be identified. The analysis in this study is concentrated on the regional level, where the sectarian dynamic or rhetoric is not yet as apparent as at the domestic level (in some states), where sectarian struggles have brought two states, namely Iraq and Lebanon, almost to breaking point.