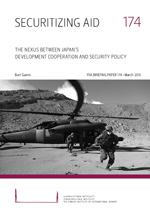 The recent hostage crisis in the Middle East involving two Japanese citizens laid bare Japan’s attempts to implement a more active role for itself in international security, through a strategic use of development cooperation and by aiming to loosen the restrictions on Japan’s military in the long term.

Throughout the post-war era, Japan has consistently applied Official Development Assistance (ODA) as an effective mechanism for promoting its own national interests, for example through tied aid and by providing loans rather than grants.

The release earlier this year of a new Development Cooperation Charter clearly reveals the securitization of ODA, or the use of aid for a more rigidly defined strategic use.

While at first sight neither the securitization of aid nor the incipient debate on the constitution are marked by huge immediate changes, they nevertheless represent a significant incremental step towards the accomplishment of the ruling conservative party’s grand strategy and the new course it is mapping out for Japan.