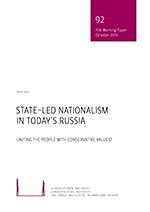 In recent years, the Russian state has been described as becoming “more nationalistic”. In the time period encompassing the Sochi Winter Olympics, the occupation of Crimea, the war in Donbas that continues to this day, air strikes in Syria, and the state seeking new legitimacy during the deepening economic crisis in Russia, many notions have been connected to growing nationalism.

But nationalism as such is an ambiguous concept. Moreover, there is hardly any state in today’s global system that could be said to be totally devoid of nationalistic argumentation. Therefore, the way in which the Russian state leadership is using nationalism in order to achieve its political goals requires a critical empirical study. Authoritarianism, conservatism, and even imperialism have been discussed as “new” features of the Russian state. But the change in the self-understanding of the Russian state is not a result of one factor, such as strengthening national pride, but rather a wide range of ideas that have been reshuffled in relation to each other. This Working Paper focuses on the state-led nationalism in this changing ideational environment between the years 2012 and 2016, and how it has been received by the people.

To this end, the Working Paper will argue that the ethnic-civic dimensions are insufficient in themselves to explain the nature of the contemporary state-led nationalism in Russia, as the official discourse both blurs these boundaries and creates new ones. President Vladimir Putin’s language simultaneously seeks acceptance by the majority of the people and control over embodiments of ethnic nationalisms. Hence, the state-led nationalism today leans on the narratives of a nation that has a history of a multinational country where ethnic Russians are still “first among equals”.

For a long time, the Russian state has been shaping nationalism by portraying an image of a united nation, held together by commonly shared culture, history, language and values. These common denominators have remained the same, but the emphasis has varied. Today, the cultural unity of Russians extends beyond the state’s geographical and political borders, and the shared values are defined from above in a more restricted manner. The official discourse aims at distinguishing the Russian nation from other nations, but also at framing the right ways to be Russian: morals and patriotism are prerequisites for belonging to the nation. The conclusion of this paper is that despite being ethnically inclusive at the level of discourse, the contemporary Russian nationalism produced by the state leadership is exclusive in its demand for conservative, traditional values.