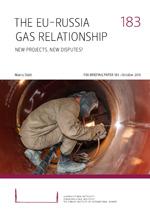 Russia is an important supplier of gas to several member states of the European Union and is likely to retain this role until at least 2030 thanks to long-term contracts with European companies and the competitiveness of its gas exports.

However, the EU-Russia gas trade is facing three sets of challenges: uncertainty over the regular transit of Russian gas via Ukraine next winter; Russia’s plans to build new infrastructure for its gas exports to the EU, bypassing Ukraine; the implementation of EU rules to liberalise the internal gas market, which in turn affects the business of Russian energy company Gazprom. As the EU and Russia will remain interdependent in the gas sector for the next decade at least, it is in the interests of both sides to resolve these issues.

In terms of EU energy security, the vulnerability of Eastern and Southern European member states to supply disruptions is the main issue concerning gas imports from Russia. Integrating these countries into EU and international gas markets and diminishing their dependence on the Ukrainian transit corridor would reduce their vulnerability.

The EU should continue to integrate and liberalise its internal gas market. Gazprom has the resources to adapt to these changes and will most likely remain a key supplier in the EU gas market. Hence, the EU should also strengthen the security of its gas imports from Russia while diversifying its suppliers and, most importantly, reducing its consumption of fossil fuels.

Viktor Orbán walks a tightrope between Brussels and Moscow: Hungary’s strategic dilemma about Russia has not been resolved