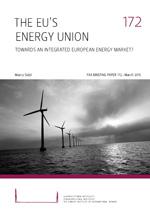 The European Union is heavily dependent on energy imports from abroad, which cover more than half of the EU’s demand. Dependence is particularly strong in the field of fossil fuels, where Russia is the EU’s main export partner.

Following the Ukraine crisis and the ensuing tensions with Russia, the objective of diversifying the portfolio of partners has gained prominence in the EU. This is particularly relevant to gas imports, as alternatives to Russian gas are limited for several EU member states.

National energy markets in the EU are largely disconnected from one another. Member states decide their energy mix and negotiate supply contracts with third parties without previously consulting their EU partners. This has resulted in large price differentials between member states.

In order to tackle these issues, the European Commission has proposed the establishment of an EU Energy Union. Its main objectives include the integration of the EU energy market, diversifying suppliers, increasing energy efficiency and decarbonising the economy.

However, the implementation of the Energy Union is likely to face several challenges. These primarily concern the reluctance of member states to renounce national prerogatives in the field of energy, diverging national interests, and the need to create adequate governance mechanisms at the EU level.

Ripe and ready for Rio+20? The UN conference on sustainable development and the European Union

Bargaining in the Saudi bazaar: Common ground for a post-2012 climate agreement?