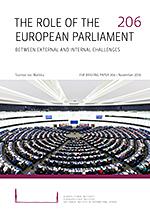 As a result of the Spitzenkandidaten process, the relationship between the European Parliament and the European Commission – and particularly their leaders – has strengthened. This inter-institutional connection also has a party-political dimension, being intrinsically linked to the emergence of a ‘grand coalition’ between the two biggest groups of the EP.

However, in an EU beset by crises, the political agenda is firmly under the control of the member states and the European Council, which makes it difficult for the EP to take advantage of its closer relationship with the Commission, as the latter acts very cautiously.

Despite their increased presence and visibility, the different Eurosceptic forces have almost no power in the European Parliament: they remain divided and are actively marginalised by the EP’s traditional mainstream parties.

Although the close cooperation between the EP’s political groups aims at guaranteeing the functioning of the EP, it – together with the close relationship between the leaders of the Parliament and the Commission – risks strengthening the monolithic image of EU politics.