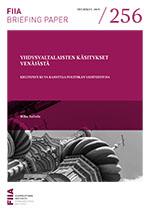 American public opinion of Russia is at its most negative since the end of the Cold War. Although the downward trend began before the 2016 presidential election, Russian interference in the election and subsequent investigations have further exacerbated the negative impressions.

The unfavourable images of Russia constrict the policy options available to the Trump administration with regards to Russia. Any action that might be interpreted as too accommodative towards Russia easily leads to outrage, backlash and highlighting the role of Congress in US foreign policy.

Interaction between public images of great powers may increase Trump’s options regarding Russia. For example, a sudden cooling of the already stressed relations with China might draw attention from Russia or mitigate the prevalent negative impression.

Trump and Putin: Increasingly at Odds