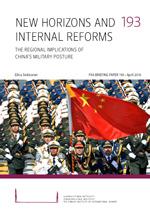 At a rhetorical level, China adheres to the idea that it has a model for a ”new type of great power relations”, indicating that its rise will not lead to a major power conflict. This idea becomes less and less clear with each move China makes in developing military operability in long-distance situations.

China’s first military strategy, published in 2015, emphasizes the role of the navy in ”managing the seas and oceans and protecting maritime rights and interests”. This strategy now has multiple tangible manifestations: China has started building a naval base in Djibouti situated in the Horn of Africa, and is also building its first operational aircraft carrier. The navy is being reformulated as an elite force and Chinese marines are gradually being trained for long-distance operations.

According to President Xi Jinping, the country is conducting the largest military reform since 1949. In addition to merging administrative units with the Central Military Commission, reforms completed so far include forming new military regions. The motivation for the reforms is to ”establish a coordinated system to better enable modern warfare” but also to consolidate Party control over the military.