The US presidential and congressional elections on November 8 will take place in an international security environment characterized by multiple and diverse threats, and following the most bitter campaign in recent memory. While domestic issues — and the personalities of the two candidates — have dominated the campaign, there have also been sharp divisions over foreign and security policy issues. Whoever wins control of the White House, Senate, and House of Representatives, America will need to deal with a range of short- and long-term international challenges. including an assertive Russia, rising Chinese power, and dangerous and unpredictable state and non-state actors elsewhere in Asia, the Middle East, and Africa. The campaign also has helped to shine a spotlight on US domestic issues, ranging from immigration, justice, and race to the role of money in politics, that will continue to reverberate through the political system for years to come. What are the main geo-strategic challenges to be faced by the new Administration when it takes office on January 20th? Where can the new US president play a decisive role in foreign and defense policy, and where are congressional and public opinion constraints likely to be most important? Is the polarization evident in many areas of domestic policy likely to grow more or less acute in the coming years? How can determined non-government organizations bring about reform in the US political and judicial systems?
Speakers: Walter B. Slocombe, Senior Counsel, Caplin & Drysdale’s Washington D.C. office
Nicole Austin-Hillery, Director and Counsel, The Brennan Center for Justice, Washington D.C. Office
Leo Michel, Visiting Senior Research Fellow, Finnish Institute of International Affairs
Chair: Teija Tiilikainen, Director, Finnish Institute of International Affairs

Director of FIIA Dr. Teija Tiilikainenopened the seminar. She remarked that the presidential campaigns have revealed some underlying new trends but also continuities in United States politics.

Walter B. Slocombe, Senior Counsel with Caplin & Drysdale, noted that while the American president has immense power over foreign and security policies, the presidential election campaigns mostly deal with the domestic policy issues. He said that Secretary Clinton will be most probably elected as president and the Republicans will likely continue to control the House of Representatives. The Democrats have a better chance at gaining control over the Senate, but this is not certain, in his view. If Clinton is elected as president, we are going to see a lot of continuity with the policies of the Obama Administration. Mr. Slocombe said that Clinton sees Russia as a threat, and she was one of the first to declare that the ”reset policy” with Russia had failed. She thinks that Brexit was a mistake, and she would put great emphasis on strengthening the transatlantic relationship. But Secretary Clinton also was a strong advocate of the U.S. ”rebalance” to the Asia-Pacific region, and in particular, she sees China as the most important issue for this generation. Despite the bitter campaign for the Democratic presidential candidate nomination in 2008, President Obama and Clinton managed to work together. Mr. Slocombe noted that it can be interpreted as a sign of mutual respect. Clinton might be more assertive than Obama regarding the use of military power, as evidenced by her role in favoring the 2011 military operation in Libya. She also wants to have a no-fly zone over Syria. She supported the Iran nuclear deal, but will insist on strict implementation, and she has remained critical of the Castros in Cuba. Mr. Slocombe noted that Clinton has been skeptical about trade deals for a long time, and she has only supported small trade deals. She has been concerned about environmental and labor issues as well as dispute settlement within the trade partners. Mr. Slocombe remarked that her speeches indicate things from her personal history, such as advocating respect for women’s rights and human rights. She has supported equal treatment before the law for the LBGT community, and has advocated that the United States join the International Criminal Court. Should Clinton be elected, we will see an unprecedented number of women in government positions, concluded Mr. Slocombe.

Nicole Austin-Hillery, Director and Counsel of the Brennan Center for Justice Washington office, remarked that even though Americans have their first African-American president and a woman running for president, there remain serious instances of social injustice in the United States.  For example, the incarceration rate is still too high, and community trust is suffering from the turmoil of law enforcement. The Brennan Center is deeply engaged in the effort to reform the criminal justice system, to include restoring the right to vote of former felons once they have completed their prison sentence. For persons trying to reenter society after incarceration, the right to vote can be almost as important as finding new opportunities to work and get housing, Ms. Austin-Hillary remarked. Ironically, reforms affecting the prison system might be one area of limited bipartisan cooperation, since a growing number of Republicans and Democrats agree that the present system is both unfair and inordinately expensive.  The protection of voting rights for all citizens is another major issue that the next Administration and Congress must address.  In recent years, following a U.S. Supreme Court decision to strike down key protections for voters in the 1965 Voting Rights Act, several Republican-controlled states introduced new laws that were intended to make the electoral system less accessible for minorities (especially African-Americans and Hispanics), the poor, students and the elderly.  Several non-government organizations, including the Brennan Center, have had some success in the federal courts in overturning new state laws that amounted to voter suppression. Still, this will be the first national election to take place in several decades without the full protection of the 1965 law.  The next president also has to tackle immigration, race and class issues, she added.  Finally, the new Administration and Congress need to find new ways to reduce the role of money in U.S. politics, but this will be a very hard fought issue.

FIIA’s Visiting Senior Research Fellow Leo Michel addressed the issue of cyber security in the elections. The U.S. intelligence community has publicly stated that Russian ”hackers,” acting with the approval of the most senior Russian officials, have tried to interfere with the U.S. election process, as demonstrated by the leaks of emails from the Democratic National Committee and key advisors to Secretary Clinton.  Senior Republican politicians and former officials have criticized Mr. Trump for publicly urging Russia to use cyber espionage to hack Clinton’s emails and release them. Vice President Biden has said that the United States intends to ”send a message” to Russia about the hacking, and that President Putin ”will know it.” The United States could respond to Russian hacking in several ways. For example, the former NATO SACEUR, retired Admiral Stavridis, has raised the possibility of publishing the names of Russian officials in charge of the incidents or exposing their hidden overseas financial dealings. In addition to hacking, American elections are affected by a polarized Congress, the increasing role of money in the politics, the changing structure and content of the American media, and demographic and societal change, Mr. Michel concluded.

Dr. Tiilikainen then opened the floor for discussion. Mr. Slocombe said that should the election turn out to be very close, Clinton’s legitimacy would be a real issue. Ms. Austin-Hillery added that Americans do not want their democracy to collapse and they are tired of a poorly functioning government. Mr. Michel concurred, adding that although the extremist rhetoric will find some echo, the American public is by-and-large smarter than conspiracy theorists seem to think. To the question how the U.S. position would change towards Russia if Clinton was to be elected, Mr. Slocombe said Clinton might push Europe harder to stay with economic sanctions until the Minsk agreement on Ukraine is fully implemented. Clinton also would certainly continue the U.S. emphasis within NATO on reassuring Allies and deterring Russia through modest NATO deployments in the Baltic states and Poland. Policy towards the EU is not going to change, Mr. Slocombe said. Mr. Michel added that the upcoming elections in Germany and France can still have an effect on issues affecting NATO and Russia.

Mr. Michel remarked that Clinton has publicly supported a no-fly zone over Syria.  However, if she becomes President, she will have to weigh the risk of confrontation with Russia.  Should Clinton win, the Republican party must do some soul searching, Ms. Austin-Hillery noted. Mr. Michel added that Clinton will not have an easy time with her own party either, because more progressive and left wing approaches, led by Senators Warren and Sanders, have gained ground in the Democratic party. After Sanders’ strong showing in the primaries, Ms. Austin-Hillery observed, the Democratic party has to rethink whom it represents. Over the long term the Republican party can have a problem with legitimacy, said Mr. Slocombe, and a deep division within its various factions might put its survival into question.  Ms. Austin-Hillery remarked that the media will have a huge role in making facts matter again. 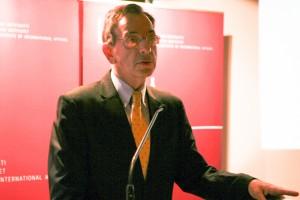 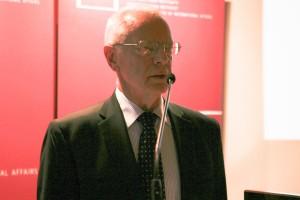 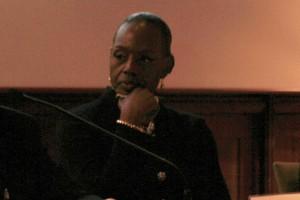 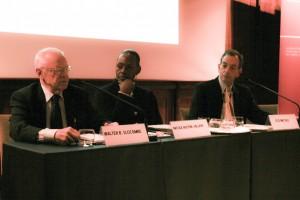 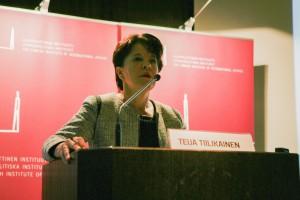