What is the current situation and what are the prospects of the political dialogue between the Republic of Belarus and EU? How does Belarus view cooperation with the Eastern Partnership Program of the European Union? What are the problem points of EU trade and economic relations with Belarus? What is the legislative basis of Belarus–EU relations, and what are the possibilities of the resumption of the EU Partnership and Co-operation Agreement negotiations?

Discussing these topics and more:

Professor Raimo Väyrynen welcomed everyone to the seminar and expressed his delight to have H.E. Mr Sergei N. Martynov give a presentation.

Minister Martynov began by stating that we have to understand the issues related to Belarus’ geography and economy in order to understand the relations between Belarus and the European Union. Belarus is situated between two huge power centres; the EU and Russia. Historically the location has been a curse for Belarus because the country was always involved in conflicts between its eastern and western neighbours, first in one, then the other direction. The location is also a blessing, as Belarus is in the middle of everything. The location defines that Belarus must have a good relationship with both the EU and Russia. An often-heard question is whether Belarus is with the EU or with Russia, but it cannot and will not make a choice, it is with both of them.

When thinking about Belarus’ foreign policy it is important to understand the location between the two giants but also its economy, which is manufacturing and export oriented. Belarus doesn’t have abundant supplies of domestic raw materials and thus it has to import practically everything. Belarus is strong in heavy machine building, petrochemicals and high technology products. The country produces things that are hard to sell, but does it successfully. Besides the Russian and the EU market, the Third World is also a very important market for Belarus.

Minister Martynov emphasised that the liberalisation process is a priority for Belarus and it is increasingly opening up its economy to foreign investments. The transit aspect of Belarus’ geographical location is also important. 30 % of Russian gas is going to Europe through Belarus. The country increased gas traffic to Europe during the Ukraine-Russia gas crisis. Belarus prides itself for providing safe and reliable transit and it has invested a great deal in the pipelines.

Minister Martynov stated that EU’s Eastern Partnership project is not a gift for Belarus, but it is of mutual benefit for all concerned. Belarus works with Russia on the Eastern Partnership, because Russia doesn’t believe it to be a good tool.

In the Q&A session Prof. Raimo Väyrynen was interested in the Nord Stream pipeline as Belarus is a transit country for gas pipelines. Minister Martynov said that when the Yamal pipeline was build, it was created with such an infrastructure that it is possible to put a second stream next to the first pipeline. He said this would be the easiest and cheapest way to supply the gas now planned to transport via the Nord Stream pipeline, but that choosing the latter option is Russia’s decision.

A question about Belarus’s interest in the EU was posed from the audience. Minister Martynov answered that Belarus is not applying for EU membership and is not expected to do so even in the future, although Belarus is situated in the middle of the continent. Also the question of the death penalty in Belarus was raised from the audience. Minister Martynov stated that a referendum would be needed to change the situation of the death penalty in the country. Belarus has nevertheless excluded people from this punishment, as people under 18 and over 65 as well as women can not be executed. The actual amount of executions has also fallen dramatically during the past decade. The government is working for a shift in the public consciousness, but the public in Belarus strongly supports the death penalty. The government is also attempting to make the parliament debate the issue and it is in fact now considering launching a working group on it. When asked about practical priorities for EU –cooperation, Minister Martynov mentioned a project to create a transit corridor reaching from the Baltic to the Black Sea (Kaliningrad-Klaipeda-Vilnius-Minsk-Kiev-Odessa), the electrification of the rail system via Belarus, as well as investment in interconnectors between the old Soviet and European grids. He emphasized Belarus’ priorities of being a stable, reliable neighbour and country of safe transit. 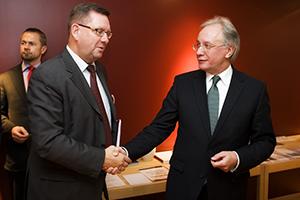 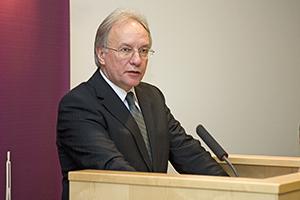 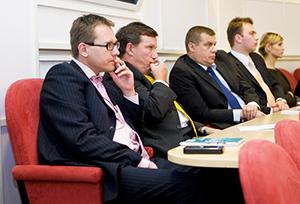 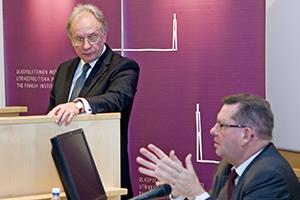 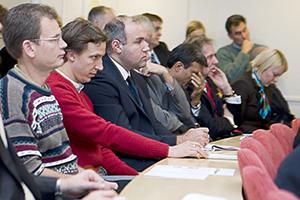