A numerous and distinguished seminar audience, which had gathered at the FIIA, had an exceptional chance to hear Doctor Jon B. Alterman from the Center for Strategic and International Studies in Washington D.C and his lucid analysis of the current situation in the Middle East. Dr Alterman is a renowned Middle Eastern Politics expert who is currently the director and senior fellow of the Middle East Program at the CSIS. His presentation with the title ‘The Middle East after Iraq’ consisted of an overview of the most important changes in the post-Saddam Middle East and the major enduring factors that will predominate in the region.

First of all, Dr Alterman emphasized that the Middle East is and will continue to be a vital area to United States’ national interest. Therefore, the whole region, and especially Iraq, will remain as key components for U.S. national security for a long time. Moreover, global energy resource estimates show that even after more than two decades the world will still be reliant on fossil fuels. This means the U.S. will still continue to ‘care about’ the Middle East for a long time.

According to Alterman, the U.S. operation in Iraq has produced fears on the state level and consequently, states have created coping mechanisms for the changed situation. The fall of the Ba`th regime and the continuing occupation still provoke negative sentiments among the publics, such as humiliation (because of the rapid fall of Saddam’s regime), scepticism (the U.S. is believed to be punishing the Arabs) and anti-Americanism. Alterman saw that what is happening in Iraq fits region-wide into a broader narrative of injustice, weakness and oppression. This is precisely why the Israeli-Palestinian conflict still remains so central for the Arab states (and Iran).

Most of the Middle Eastern states would not like to see Iraq succeed. A strong Iraq in the past decades meant wars, first against Iran, then against Kuwait. In other words, many states in the region prefer ‘slow boil’ to United States’ success. The initial fear of a democratic domino-effect has subsided, but the instability in Iraq presents problems to its regional neighbours: On the one hand, Iraq turning into Somalia is not in their interests but, on the other hand, a strong Iraq is equally undesirable. As coping strategies, states have limited their cooperation with Iraq and they support insurgencies and agitate their own publics against the U.S. in order to distract attention from their foreign policies which often receive little public support.

Dr Alterman highlighted some trends which will be crucial for the development of the region in the near future. Firstly, the share of 15-30 year-olds in Middle Eastern states will stay at almost 30% for the next decades. It is this age group which must be taken special care of in order to prevent alienation and radicalization. Tools for this are top-down: the governments should be able to provide this share of the population with meaningful functions in the society. Secondly, identity of the Middle Eastern youth is under question. As a consequence of technological development and increased access to information as well as of the rise of certain regional powers, the young people are now asking what it is to be an Arab or a Muslim in modern times. The down side of advances in media and technology is that they make the overwhelming majority feel poor. Also, the rise of the so-called “Mid-Tech”, which includes phones, photocopiers, fax and videotapes, has facilitated one-to-many communication. This means that mobilizing masses is no more an exclusive right of the governments. Publics determine what they consume and not vice versa.

Towards a soft partition of Iraq?

In addition to the ongoing violence and a leadership vacuum, the central authority in Iraq has less and less control. According to Alterman, in a few years, Iraq might resemble Afghanistan where the president currently has no control of the provinces that are controlled by warlords. The United States’ ability to achieve change is also generally decreasing. Already now, Dr Alterman argued, Iraq is moving towards a soft partition, which will in practice mean a loose federal state and a weak central government. In the Q&A-session Dr Alterman addressed a question on the future of the financing of the Iraqi operation. He envisaged a half-year debate after the forthcoming Petraeus report (due in mid-September 2007) which will try to tackle such questions as what the expectations and goals are and how to achieve these. The republicans will probably be held over in the elections and by a disaffected public beyond the year 2010.

Challenges for the U.S.

In the concluding part Dr Alterman stated that one of the future challenges for the United States in the Middle East will be to be relevant and responding to people’s aspirations; being aspirational instead of trying to be inspirational. While the U.S. influence in the region has hit an all-time low, in the future it should seek to right-size its role by asking ‘who are we and what can we do’. 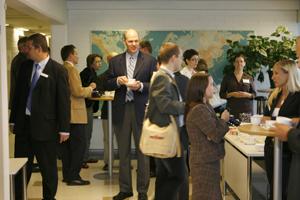 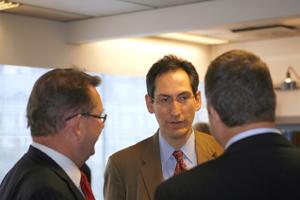 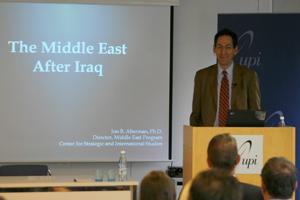