Historical background and problems of the present system

The external dimension of the 1957 Rome Treaty was limited to trade and development assistance. It is noteworthy that the word “foreign policy” was not mentioned in the Treaty. It was not until the Maastricht Treaty (1992) that the Common Foreign and Security Policy (CFSP) was created, and the post of the High Representative for CFSP was established in the 1997 Amsterdam Treaty. Thus, the present system includes two ‘pillars’: community policies, managed by the Commission and CFSP, managed by the High Representative. The whole framework consists of multiple actors including the Presidency, the High Representative and the Commission. Problems of this present system include rival agencies, duplication of work in Brussels and multiplicity of voices speaking on behalf of the EU. Thus, there is a need for more coherence, cost-effectiveness and visibility.

The new architecture of the Lisbon Treaty

1.) The High Representative of the Union for Foreign Affairs and Security Policy
This person will act as the High Representative for the CFSP by coordinating the external relations in the European Commission as a Vice-President and acting as a chairman in the meetings of EU’s Foreign Affairs Council (in place of the present six-monthly rotating Presidency). He/she will be appointed by the European Council by a qualified majority, with the agreement of the President of the Commission. Mr. Avery mentioned two things related to the appointment of the High Representative and his/her deputies: at least one should be from the new member states and at least one should be a woman. (There is a story that in the European Union, there will be three B’s: Blair, Bildt and Barroso.)

2.) The European External Action Service (EEAS)
According to the Lisbon Treaty, this new service will assist the High Representative in fulfilling his/her mandate and it would comprise of officials from the relevant departments of the Council Secretariat and the Commission in addition to the staff seconded from the diplomatic services of the member states. In practise, this means that the more than 125 already existing Commission delegations in third countries will speak not only for the EC but also for the whole Union. To conclude, the Treaty involves more questions than answers regarding the role of the EEAS, its design, location, resources, structure, Union delegations, budget, member states and timetable.

As a conclusion, Mr. Avery said that the new Treaty maintains some four actors in EU foreign policy: The High Representative/Vice-President, The President of the Commission (except for the CFSP, monetary affairs and the euro), The President of the European Council (the external representation of the Union on issues concerning CFSP) and the European Parliament. According to Mr Graham, the main purpose of the Treaty is not to affect the national systems, but to make the European system function better. Thus, the pillar structure will not disappear; it will still remain at the decision making level. However, one thing is clear: the public wants Europe to be more effective in foreign policy issues. According to the latest Eurobarometer, 2/3 of the European citizens want a more effective foreign policy conducted together by the member states.

The Lisbon Treaty should enter into force on the 1st of January 2009 and thus the concrete work to set up one of the biggest innovations in the Treaty, the European External Action Service, should start now. Enhancing the global role of the EU is an aim shared by all but when we get into the ”how” of the matter and into setting up the rules on decision-making, views become more nuanced. The national Foreign Ministries aim to send officials to rotate between Brussels and the EU Delegations, which has concrete implications for budgetary and personnel planning in national services. These issues should be taken into account if we are to get the national systems to support the External Service.

In Finland’s view, the EU’s external action should be regarded as a whole and thus the EEAS should ease institutional tensions which traditionally exist in this field in Brussels. The preparatory work carried out in 2004-2005 (before the Constitutional Treaty got into turmoil) should provide the basis of the new Service. Finland has insisted that the work has to proceed fast. The concrete organisation of the EEAS will take time, but hopefully the EEAS will be fully operative in five to eight years. The preparatory work will have to involve all Member States.

We must be strict with the aim to agree on all the crucial aspects of the EEAS before the Lisbon Treaty is in force. An overall agreement among the Member States on the EEAS should be reached by the end of this year. If the work is duly done during this year, the new High Representative can formally propose the decision establishing the EEAS in early 2009, and after consulting the European Parliament, the Council will approve the decision. The financing of the EEAS needs to be also agreed in the 2009 EU budget.

In the negotiations on the Constitutional Treaty, Finland was among the Member States which saw added value in the future EU Foreign Minister and in having him assisted by ”EU diplomacy”. In addition, Finland pushed for more qualified majority voting in the Common Foreign and Security Policy. Moreover, Finland has insisted that the personnel of the EEAS must be chosen based on merit. Finland estimates that it will send approximately 15 to 25 officials to the EEAS and the EU Delegations during the first five years.

Regarding different competence areas, the tasks of the Council Secretariat related to the CFSP will be transferred to the EEAS, and so will be the tasks of the Directorate General RELEX of the Commission. But what else, is a more delicate issue. For instance, Finland would be reluctant towards including tasks related directly to the conduct of the trade policy into the EEAS, as the Commission performs them very well now and trade is at the core of its competences. Development is not a clear-cut case either. Neither should we confuse the enlargement policy with the Union’s external action.

The EEAS is an important innovation. It was originally envisaged to support a more coherent, visible and efficiently conducted EU Foreign Policy. We use the term ”the Union’s Global Role” because that is what the EU more and more has. A new highly visible actor, the new double-hatted High Representative, should work for more coherence in the EU’s external action. The High Representative should be the Union’s representative in the world at large The EEAS and its delegations can become an important asset to the European Union as a whole.

Mr Haukkala presented three different views on the topic: cynical, pessimistic and optimistic.
A cynic sees that the EEAS is likely to remain irrelevant and marginal because the problems in the European foreign policy are political and not institutional. The war in Iraq and EU-Russia relations are good examples of this.

The pessimist’s view is that even if the EEAS as a concept could potentially be a very important new development, it is highly probable that the member states, as well as the main players in Brussels, make a mess of it because member states often have good ideas and concepts but fail to implement them. The way in which the original plans for the Treaty and the position of the foreign minister were handled are good examples of that. Thus, there exist challenges and threats related to the make-up of the EEAS even before it has started. The most likely outcome of the process is that we will witness the emergence of a rather small and ineffectual bureau around the new High Representative, because the EEAS is potentially too dangerous for too many players to be allowed any bigger role.

The optimist’s view is that starting small is actually only sensible. The EEAS is a newcomer and will have to start from scratch and develop its own procedures and largely learn by doing. In this respect, it makes sense to start small and avoid politically and economically costly mistakes in the process. Second, despite the short-term achievements, which might remain rather modest, the long term impact of the EEAS is not yet known. There exist at least two avenues through which the EEAS can make significant impact. First, the EEAS could become to the EU foreign policy what the “corpus callosum” is to a human brain: a part of the brain that connects the left and right hemispheres in the human brain into a coherent whole that we call consciousness. Indeed, making the EU more conscious of the overall effect of its external actions could be one of the most useful side effects of the EEAS. The second long-term effect is the yet unseen Europeanization of foreign policy.

The questions dealt with the role of the candidate countries, the recruitment process of the new diplomats, the role of EU’s special representatives, and with the risk of creating a new “super version of national foreign ministries” rather than a postmodern, new kind of political actor. In addition, the role of the EU in the international organizations, like the WHO and UN and the Coordination function of the High Representative were discussed. 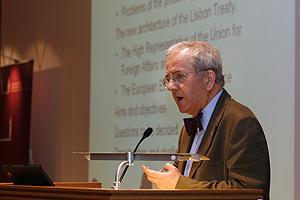 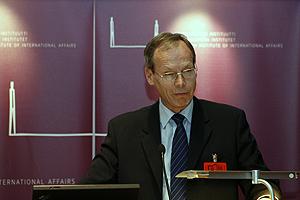 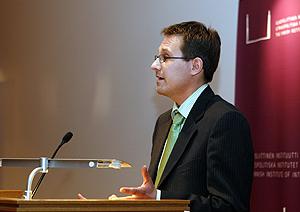 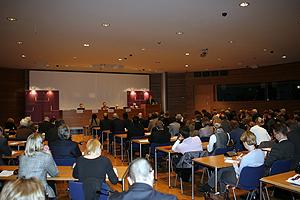