The seminar aimed to address the existing and potential gaps between researchers and policy-makers from the perspective of both of these communities and via a number of case studies. The seminar seeked to assess to what extent decision-makers take EU policy research into account in their daily work and examine how researchers understand the nature of policy-relevant research. The idea was also to enhance future cooperation by strengthening the links between the two communities.

Session 1: How – and why do we do it? The scholarly view on the topic

Session 2: How do we use it? The use of scholarly advice in the making of policy

The first session of the seminar concentrated on the scholarly view of the topic: how is policy oriented research conducted and why. Dr. Vadim Kononenko opened the session by bringing up the four dimensions of discussions (See the table).

Dr. Pasi Saukkonen highlighted three problem areas related to the gap between researchers and policy makers. These problems include, firstly, a lack of factual knowledge of the field, e.g. there are students who lack basic knowledge of the EU even if they study EU studies. The second problem relates to methodological knowledge, namely quantitative versus qualitative knowledge. There are many scientists who are unable to do simple quantitative studies e.g. based on survey material. However, this is the kind of method that usually goes “through”. The third problem relates to researchers’ attitudes: there are many researchers who have a problem with working together with decision-makers and civil servants etc. This is again related to the first problem, mainly the issue that too many researchers think that facts do not matter.

Prof. Tuomas Forsberg stated that there are three schools according to whether the IR research should be relevant from the point of view of policy-makers. First view is that IR research should not be relevant and the second view is that it should be very relevant in the decision making processes. The third view is that scientific research should not aim to be policy-relevant, it is policy-relevant only to the degree it educates future generations of decision-makers. However, the field is so big and so much money is poured in that it cannot be justified if it does not have any policy relevance or if it is simply a critical voice. At the same time, policy advice and criticism often go hand in hand and good policy advice should be based on analytical thinking and systematic research. Finally, we can always ask what kind of research is useful. Sometimes research is useful if policy makers can use it for their own purposes. The exact difference between academic and policy oriented research is that policy oriented research is more timely, can be more provocative and is shorter.

Dr. Helena Rytövuori-Apunen brought up the researcher’s dilemma, which makes answering the decision-makers’ needs more difficult. This dilemma refers to the pressure to publish internationally in peer reviews, international journals etc. This is related to the academic meriting system that encourages publishing abroad. This alienates from our own immediate social and political context. Therefore a better balance needs to be found within the academic meriting system. A second dilemma relates to policy-making. During the Cold War years, researchers participated substantively in policy discussions much more than they do today. Currently, Finland keeps following the institutional policies of the EU. Thus, the EU has absorbed resources from other research topics. But EU research is focused on the EU directly, not on Finnish policies and the effects of the Union’s policies on Finland. If/when Finland can find more space for her own deliberation and initiatives, researchers will be needed more often in the preparation and assessment of policies and their expertise can be more fully used. Finally, Dr. Rytövuori-Apunen highlighted the words of Harold D. Lasswell, who argued already in the 1950’s that an important task for research is to improve the concrete content of the information and the interpretations available to policy-makers.

The second session took another point of view to the discussion; namely how do decision-makers use research in the decision-making processes and what is the use of scholarly advice in the making of policy. The chair of the session, Dr. Henri Vogt started by wondering that if the decisions are not based on research, then what are they based on. Ambassador Jari Luoto from the Ministry for Foreign Affairs brought in a slightly pessimistic picture by stating that academic research can provide a framework and a lot of background information but it very rarely offers good advice for policy makers in a time of sudden policy changes. For example during the Soviet Union more information was gained from the opposition’s magazine called Index than from the researchers. Therefore, constant change of time is a real challenge for researchers. However, researchers can provide much of relevant research for long term decision making and strategy planning. Enlargement of the EU is one issue where long term planning is at stake. More emphasis should also be put on inter-disciplinary research. In general we can say that it is amazing how little movement there is between the academia and administration in Finland. Things are very differently in other countries in this respect.

Ms. Eija Limnell from the Ministry for Foreign Affairs had a more optimistic view. According to her, the status of research is higher and higher in the ministry. Alongside, there are of course other sources of information like embassies, media, etc. Based on that information, policy makers can react fast and make decisions. However, there is a need for a change of culture and change of attitude. The ministry is already commissioning papers from certain research institutes abroad and in Finland. There are also seminars, lecture series, exchange programs with universities, and plans to employ researchers to the ministry for a few years. Aiming to bridge the gap between researchers and policy makers, i.e. the actual purpose of the event is important to keep in mind in all the activities. For example, she once attended a good roundtable event on Middle East, but in the end people where wondering why it was organised. Therefore it is important to create these common spaces for some special purposes.

Mr. Petri Helander from the Finnish Parliament brought up two major areas where more research on EU policies is needed. The first one relates to Finnish perspective; what is relevant from our point of view and on the other hand, what can we bring to the discussions. Secondly, more analysis is needed on such issues that are not available easily, like other member states’ positions and moreover the discussions and debates that are going on in other European countries. Finland is lacking a think thank that would cover internal EU issues, like SIEPS in Sweden does. Mr. Helander stated that policy relevant research means timely research and has advanced influence. For example, it is important to act before a commission proposal comes out. More pro-activity is needed: researchers need to inform policy-makers about upcoming issues. Finally, the importance of exchange between the two communities is needed.

Mr. Jyrki Iivonen from the Ministry of Defence emphasized the fact that at the Ministry of Defence people have to look at the future all the time. Since the end of the cold war volume in policy relevant research has increased, also because the role of the ministry has changed. Now more emphasis is placed on strategic planning. Iivonen stated that what is actually needed in the ministries is a phone number to call. Also the role of consultants is important. One example of this is a book “Russia of Challenges”.  There were six groups and from each group a chairman wrote an article based on discussions in the group.

During the discussions, many additional points were brought up. Many participants thanked for creating an event of this kind as there has not been this type of platform before. Some basic definitions were still lacking, for example, what is research since it also includes opinions and ideas. It was stated that research has a role to play especially in showing long term tendencies. This distinction is not so clear as some researchers can do research years and years on a topic that is not policy relevant but suddenly it becomes policy relevant. Research can also be used as a way of lobbying.

Problems that researchers had come across related to resources: often, researchers do not have access to the material that decision-makers have. Another problem is the fact that in today’s world there is so much communication but so little dialogue. Contacts between the two communities should be on a daily basis. A third problem in the context of policy relevant research is that it does not merit academically. What counts are the peer reviewed articles, and nothing else.

Policy makers stated that they need research that is reliable and gives information on  where Finland can influence the EU agenda. In addition, it was reminded that if you try to sell your research findings to the EU, the emphasis should not be on the EU, because EU civil servants know the EU already. Added value comes from substance knowledge of a certain region. Moreover, information about how the EU affects the Finnish political decision making is needed, also in a form of a handbook. Information on small states in the EU could help to understand the Finnish perspective. However, there is always the problem of the lack of time from the policy makers’ side. Finally, some pessimist voices stated that it is not certain if research can help them much because their work is about learning the codes in practice.

There were still many open questions for both communities, such as that regarding research agendas: who has the right to add items to the research agenda. The principles of academic research mean that no-one from outside can decide on this but at the same time researchers try to maximize their possibilities to get money. Influencing the decision-making process can happen via influencing the research agenda. Another open question is the generation gap. Currently, we have new generation of  civil servants  who deal with EU questions. The generation that took us to the EU is no longer involved in the decision making processes. Generation gap exists in the research community as well: today’s researchers have studied during the 90’s. The third open question concerns the role of media which seems to have taken the upper hand and acts unethically at times.  and that could be sometimes unethical.

During the discussion, possible solutions to these problems were also brought up. One option could be to make exchanges between the academics and civil servants at the ministries. This would have a long term influence. Especially the policy-makers emphasized the importance of networks in Brussels. These could be further strengthened. 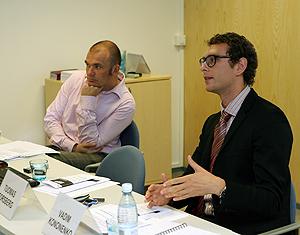 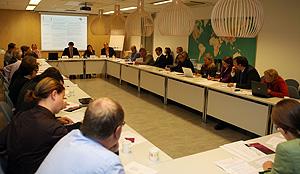 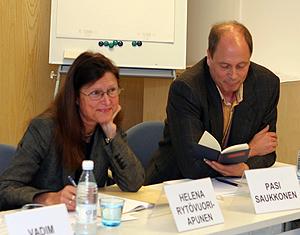