The European Union’s influence in UN forums has dramatically declined over the last decade, argues a new report by the European Council on Foreign Relations (ECFR). Europeans insist that the UN is central to their vision of universal human rights and a rules-based world order. However, UN voting patterns show that the UN decision making is increasingly being shaped by China, Russia and their allies. This has been made brutally clear in the Security Council, the General Assembly, and the Human Rights Council. What should the EU do to counter this trend?

Joint presentation by the authors of the report:
“A Global Force for Human Rights? An Audit of European Power at the UN”
Richard Gowan, SeniorPolicy Fellow, European Council on Foreign Relations
Franziska Brantner, Consultant with the United Nations Development Fund for Women, Co-founder of the think tank Actopia

The report “A Global Force for Human Rights? An Audit of European Power at the UN” is available at: http://ecfr.eu/page/-/documents/UN-report.pdf

Professor Raimo Väyrynen, director of the Finnish Institute of International Affairs, opened the event by congratulating President Martti Ahtisaari on his Nobel Peace Prize. Väyrynen then moved on to introduce the other speakers of the event and to thank the European Council on Foreign Relations (ECFR) for their cooperation in organising this event. Professor Väyrynen noted how the ECFR has already published several highly interesting reports, despite being founded only a year ago. The report discussed in this seminar is based on a quantitative analysis of UN voting statistics over the past ten years. The analysis reveals a drastic decline in the number of allies supporting the EU positions in human rights issues.

President Martti Ahtisaari began his speech by briefly reminiscing about the Nobel Peace Prize ceremony at the end of the previous week. He continued to explain the role he and the other co-chairs of the ECFR, Mabel van Oranje and Joschka Fischer, have within the Council. As to the ECFR’s aims, President Ahtisaari referred to the statement of principles of the Council, which spans from highlighting the need for more coherent foreign policies in EU member states, to encouraging the Union to use its transformative power outside its immediate neighbourhood. The decline of the EU’s influence from the 1990’s to the present date is noticeable. However, this trend could be reversed, if the EU just puts enough effort into doing so. The EU needs to be more effective in its attempts to promote its values and influence Africa, Asia, and Latin America. President Ahtisaari compared the current challenges with those he encountered in his work for Namibia. It is remarkable how, in 1988, countries such as the US, the Soviet Union, Cuba and the states in the region were able to cooperate, despite the differences amongst them.

President Ahtisaari showed optimism towards the current situation, too. He was especially delighted by the most recent statement made by the Middle East Quartet. He concluded his speech by reminding how important the UN has been to Finland in the past and stressed the need to maintain this relationship in the future.

Alexander Stubb, Minister for Foreign Affairs, sought to explain how he sees the global challenges international institutions are facing. To fulfil this aim, he set out to define the economic and political aspects of the challenge, as well as global governance itself. According to minister Stubb, three events have become defining moments in the post-cold war era. First of these is the fall of the Berlin Wall, which led to the re-unification of the east and the west. The second moment occurred on 9/11, and led to major changes in our perceptions as well as practices, as our focus turned to terrorism. The third moment took place in the form of two events which are related only because of their chronological proximity: the start of the war between Russia and Georgia on 08/08/08 and the start of the financial crisis on 08/09/08.

As to the international institutions, minister Stubb was of the opinion that after the cold war only two have been able to press the “refresh” button: the EU and Nato. The EU has introduced the Euro, doubled its membership, and has 10 new member states which nobody could have predicted just 20 years ago. There is even evidence that during the past four years, the Union has been able to push forward legislation faster than before. Nato, on the other other hand, has shown its usefulness in Kosovo and Afghanistan, and has taken on new types of tasks e.g. after the earthquake in Pakistan, the Tsunami and the hurricane Katrina. Five other institutions, the UN, OSCE, WTO, IMF and World Bank have not been so successful. The WTO has lost influence because of its failure with the Doha round. The IMF has not been able to provide ideas as to how the financial crisis should be tackled. It has rather been the EU that has proved to be more reassuring with its actions. OSCE is still necessary, but it is not functioning the way it should and needs to be believed in more by its member states.

With regard to the UN Security Council, minister Stubb pointed out that the permanent seats should be given to continents rather than to individual states. The EU should have its own permanent seat in the Security Council instead of two separate seats occupied by two of its member states. The bipolar order of the cold war era is evolving into either a multipolar or a multilateral order, as new actors gain importance. The issues of today’s world, such as climate change and the financial crisis are not problems of nation states, but rather global problems. To succeed in tackling these, the minister hoped to see a multilateral world order emerging, not just a multipolar one. The minister had noted how ideas of new international institutions are floating in the air. Yet he hoped that we would instead strengthen the current institutions. He concluded by saying that we need to finally get serious about global governance. We need to think how to get the EU model work in the rest of the world.

Richard Gowan began his comment by pointing out that we still do not know what the economic crisis, war between Russia and Georgia, or the situation in Congo means to us or to the global system. Neither do we know what choices Barack Obama’s team will make. Thus we might be in the middle of crisis, but, equally, this could be a moment of huge opportunity. The report “A Global Force for Human Rights? An Audit of European Power at the UN” is an attempt to step back from the day-to-day politics and look at the battle of ideas taking place in the UN. Gowan defined the main opponents of this battle as states seeking to preserve the traditional state sovereignty on the one side and the liberal internationalists on the other. There is also a significant “battle” over development, between the South and the North. However, the clash between the “sovereignty hawks” and the liberal internationalists is more central. The support for the EU’s positions in the UN General Assembly has slipped from 70% to 50%. At first sight, this may not seem like a cause for panic, especially if compared to the decline in support for the US positions. Nonetheless, the supporters of the EU are mainly states located in the wider Europe. Elsewhere, there is growing scepticism, and e.g. only 6 African states vote regularly with the EU. Despite some setbacks, the past years have been a relatively benign time for the EU in the Security Council. This is now changing and there is need for the EU to start building alliances.

Franziska Brantner was optimistic, and pointed out that this is a moment for opportunities and that we can reverse the decline, as it is partly caused by political shifts which are not linked to the EU. Policies adopted after the 9/11, as well as support to the US policies, have led to the alienation of many Muslim countries. African countries and the African Union have initially been supportive of ideas such as the Responsibility to Protect or the founding of the International Criminal Court. Yet, they have come to feel that Africans themselves are the only targets of these policies. For Latin American countries, EU stances on immigration issues are a major cause for discontent. Finally, the EU does not have its own “Francophonie”, a group of natural allies, and has to create support from the scratch every time. Thus, the lack of time leads the EU to lobby for policies which simply reflect the smallest common denominator. As a solution to this situation, the ECFR recommends that the EU erect a big tent in the UN. In practice, this would mean increasing mutual transparency, internal and external coordination as well as genuine dialogue. The EU should also define more clearly what it wants to get out of the UN.

In his comment, Jussi Seppälä pointed out that the decline of influence in the UN is a reflection of what is happening in the world more generally. If we bear in mind these changes, the loss of influence becomes easier to understand. However, this does not exclude the possibility that things would develop more positively in the future. Seppälä also brought up a point made in the report that the uniformity of the EU is so stern that some of its partners have grown apprehensive of it. He also stressed that the EU should make better use of the leverage it has e.g. through its role as a major donor of aid.

Professor Väyrynen opened the Q&A session by reflecting on whether the change in voting is caused by the weakening of the EU or the growing strength of the others. Though individual votes in the General Assembly may not all matter equally, the overall tendency is an indicator of how the world thinks about human right issues. Finally, he wondered whether the EU really should be the benchmark for others with regard to HR policies.

Other questions concerned the criticism expressed of the EU’s double-standards in the field of human rights, as well as the true extent of EU coherence. Double standards were seen as a real cause for concern. However, it was emphasised that it is better if the EU moves to solve this issue in a step-by-step manner than if it does not attempt to solve it at all. A further question about the prospects of UN Security Council reform was met with pessimism. Finally, president Ahtisaari emphasised that it is more important to get results than it is to worry about the nature of those with whom we work to get them. He also called for better implementation of the Security Council resolution 1325 on women, peace and security. 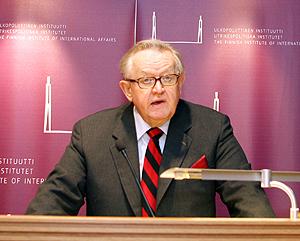 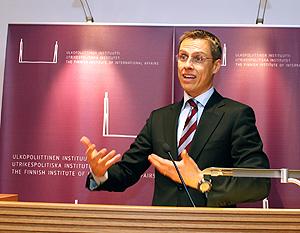 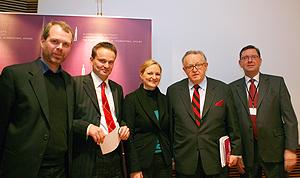 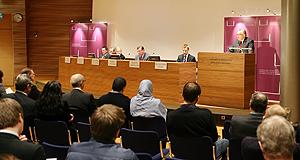 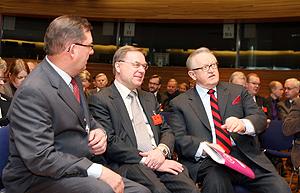 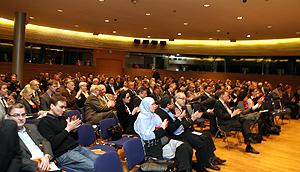 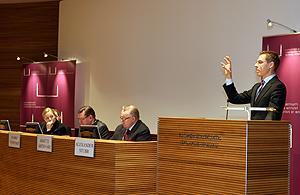