Speech by Olli Rehn: Europe’s Next Frontiers
Member of the European Commission responsible for Enlargement, Dr. Olli Rehn was the first Finnish speaker of the FIIA EU-Presidency Series with a lecture on Europe’s Next Frontiers, which is also the title of his recently published book. In his book, Dr. Rehn brings fresh and rather positive ideas to the debate on the future of European integration. He sees borders as restrictive, limiting our minds, chaining our actions and reducing our influence. On the contrary, frontiers are innovative, open new avenues, and try to tackle the future challenge with success and good preparation. Therefore, instead of limits and borders, the debate on the future of Europe should focus on the next frontiers of the European Union. Commissioner Rehn defined these three next frontiers as the economical revival of Europe, the political revival of Europe, and the new consensus on enlargement.

The first frontier and most urgent challenge is to rebuild confidence in the European economy. We have to improve our competitiveness and innovative capacity to enhance job creation and to raise employment rates. For example, the current cyclical upturn in France and Germany should be used in structural reforms. Therefore, reforms do not mean only security but also allow flexibility. Economic revival is needed as well in order to enhance the legitimacy of European leaders. These European leaders need to show their own people first; thereafter, people will give them the mandate.

The second frontier is the political revival of Europe. Debate about how to make this revival happen should avoid two false dichotomies: economic versus political Europe; and deepening versus widening. We need both an economic Europe and a political Europe. We need economic reforms to enhance our competitiveness, and political reforms to make the Union more effective and democratic. For example, there would have been no Single Market without the Single European Act of 1992, which extended qualified majority voting. Concerning the widening versus deepening dichotomy, history shows that political integration and enlargement rounds have proceeded in parallel. Since the 1980s, the number of EU members has more than doubled from 12 to 25, while the Union has simultaneously taken major steps towards deeper political and economic integration by establishing the single market, introducing the euro, and reinforcing the common foreign and security policy. Deepening and widening can also continue in parallel.

The third frontier, namely the new consensus on enlargement, signifies new neighborhoods, which Europe needs in order to extend the zone of peace and democracy, especially in South-Eastern Europe. Concerning Turkey, those who talk continually about privileged partnership are creating a vicious circle of reversed commitment, weakened conditionality, and stalled reforms. Our vision is to break this negative spiral by keeping our word and sticking firmly to the accession perspective, thus creating a virtuous circle of credible commitment, rigorous conditionality, and reinforced reforms. Concerning all the candidate countries, we should be both fair and firm, and we should uphold our commitments. We should be firm so that we can support the reforms in the corner of Europe where the future of Europe will be decided. At the end Commissioner Rehn pointed out that in the process of EU enlargement, both the economic and political revival should take place so that the enlargement can proceed.

In the question and answer part of the lecture, Mr Rehn was asked about the situation of non-member countries, namely Turkey, Switzerland, Norway, Iceland, Israel, and Ukraine. The Commissioner clearly pointed out that the enlargement process of the EU is based on a consolidation of the current enlargement agenda. In addition, the question concerning the importance of EU’s global role was addressed. Mr Rehn replied that EU has a major role concerning economic globalization, but the challenge still remains concerning foreign and security policy, where the combination between soft and hard power should be determined. 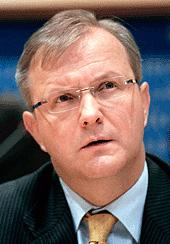