Climate change and the forces of globalization are fundamentally transforming the strategic and
economic position of the Arctic. Most of the Arctic states have already published their national
strategies, while Finland adopted an Arctic strategy in June. What are Finland’s main priorities, policy
objectives and concrete actions in the Arctic? How does the Finnish strategy correspond with those of
the other Arctic states? How can the EU have influence on the Arctic development and what is Finland’s role in the EU as an Arctic member state? Could Finland be more active in the EU and if so, how?

Ms Diana Wallis has been a Member of the European Parliament (EP) since 1999. Elected
as a Vice-President of the European Parliament in 2007, she has had responsibility for the
Northern Dimension including the Arctic over that period. Ms Wallis has been a member of the
EP Delegation to Iceland, Norway & Switzerland and the EEA Joint Parliamentary Committee
since first being elected and is also the ALDE (the Alliance of Liberals and Democrats for
Europe) spokesperson on the Legal Affairs committee.

The seminar was chaired by Dr Teija Tiilikainen, Director of the Finnish Institute of International Affairs. Dr Tiilikainen opened the event by warmly welcoming the audience, before introducing the day’s speakers and stressing the pertinence of the topic.

Mr Hannu Halinen, Ambassador for Arctic Affairs at the Ministry for Foreign Affairs of Finland, took the floor to present Finland’s Arctic Strategy to the audience. Adopted in June 2010, the Arctic Strategy was prepared by a working group appointed by the Prime Minister’s Office in which all relevant ministries participated. Follow-up work on the Strategy will be monitored by the Arctic advisory board.

Mr Halinen stressed that the Strategy focuses on external relations. The Strategy defines Finland’s goals in the Arctic Region as well as the means to reach them. It is based around seven priority sectors, including security, economy, and the environment. The reasons for the Strategy’s drafting were many. This forgotten hinterland has recently ascended to the global limelight. Of the eight Arctic countries, Finland is the seventh to draft a strategy, with Sweden to follow. As a starting point rather than a final measure, the strategy is useful also in contributing to the EU’s Arctic policy, which is a work in progress.

Moving into the contents, the Strategy holds the biggest security threats to be increasing seafaring and exploitation of natural resources. In light of this, activities should continue in line with international law. Given that the Arctic environment is fragile, sustainable development and best practices must be pursued. From a domestic perspective, Halinen points out the considerable economic potential of the region and that Finland can utilise its maritime expertise of extreme ice conditions, for example in the large Barents sea projects.

In terms of addressing problems, the Strategy makes clear that infrastructure is lacking both on and offshore and needs augmenting in collaboration with other actors. Also, indigenous peoples are seen as most vulnerable to emerging threats and environmental change, and thus indigenous rights must be secured.

The Strategy asserts that the most important institution in the region is the Arctic Council, and Finland proposes strengthening the Council. This can be done by revisiting the mandate and working methods; burden-sharing, installing a permanent secretariat, expansion of the Council’s normative role; enhanced interaction with non-arctic actors, including those seeking observer status; and developing communications and an Outreach strategy.

Additionally, an Arctic summit has been proposed for June 2010 by Minister for Foreign Affairs Alexander Stubb. This would be hosted by Finland in Rovaniemi in July 2011, with the aim of looking at how to combine the exploitation of natural resources with environmental concerns, deciding who the legitimate actors are, and how to develop the Arctic Council.

Halinen moved on to consider the EU as an Arctic player. Finland, having welcomed the EU’s Arctic communication in November 2008, believes the EU should consider the special features of the Arctic Region in the Union’s various policies and progress is seen as lacking thus far. Finland supports establishing an Arctic information centre for the European Union due to the need to better explain what is happening in and to the Arctic, and believes the EU should be admitted as a permanent member of the Arctic Council.

In concluding, Halinen stressed that cooperation is key in the Arctic. There should be no ‘gold rush’, but rather an adherence to international law. The countries share common interests, and even the difficult circumstances of the Arctic are a driver for cooperation.

Dr Lassi Heininen, from the University of Lapland, responded to Mr Halinen’s presentation of the Arctic strategy. Firstly he congratulated Mr Halinen and Arctic Strategy team on the good work they had done, saying it has put Finland back on the map in this regard. Dr Heininen also hoped Finland keeps this track for a long time, seeing it as beneficial for both Finland and the Arctic, especially given the growing importance of the Arctic and Finland’s support for non-conflict rules.

Dr Heininen told the audience that there are two narrative views on the Arctic, which see current developments as conflict and, conversely, non-conflict. Dr Heininen sees this document as a Finnish response to the new peaceful post-Cold War situation. There is a need for a holistic approach to the Arctic and Arctic strategy calls for this, with science and policy working together.

Dr Heininen was pleased to see Finland stressing the environmental aspects, and felt it was important to bring back the term ‘fragile’, seemingly rarely used for 20 years or so. However, in linking economic exploitation and environmental concerns, Dr Heininen saw problems. These twin but seemingly contradictory interests can not go together, and so there is a need to ask ‘what is the priority?’ Thus, the Strategy appears to have more expectations than realistic goals. As for strengthening Finland’s position as an expert in the Arctic region, the respondent found this to be very important, holding the view that Finland can do much more in this field, and that there would be a need for an inventory of what Finland already has in this regard.

Overall, the ideas on cooperation were seen as very welcome and timely. In terms of the Strategy’s priority, it is seen in economy and infrastructure and this is understandable. Though, if the Strategy is said to be focussed on external relations, it should look outwards not just inwards. Finally, Dr Heininen believed the document was at best when it says that the Arctic Council is now central, and should the proposed summit take place next year, this should be the main item, as the three other main goals would then follow. Finland has claimed itself an advocate and defender of EU in Arctic policy. This is positive, but has its risks. In the sum, Dr Heininen declared the Finnish Strategy to be modern and comprehensive.

Next, Ms Diana Wallis, member of the European Parliament, gave comments on Finland’s Arctic strategy from an EU perspective. She began also by congratulating Halinen and those involved in drafting the Strategy. She stressed that she can’t speak on behalf of all three EU institutions and also gave some background as to why a British parliamentarian is interested in these issues. Wallis stated that five years ago the Baltic Sea strategy took precedence in the “Northern Dimension” of the EU. It was Mr Stubb that pushed for this, but now it is also right that we redress the balance and begin to focus on Arctic affairs.

On the Strategy, Ms Wallis also agrees that Arctic makes, in cross-cutting fashion, countries cooperate and engage. She also completely agrees on the stance on the role of the Arctic Council, saying this must become more of a political body, with ministerial meetings every two years not being enough, and needing more than the soft law possibilities it currently has.

In detailing the European position, it was explained that the European Parliament has passed two resolutions on the Arctic. These were momentous for the wide-range of MEPs involved. Additionally, there are two different parliamentary groupings dealing with the region, with a formal report to be prepared for this autumn, as well as a formal response to policy. As for these groups, Ms Wallis reassured the audience that the MEPs are ambitious, and try to reflect the desires of the people they represent. The Parliament has new powers and has made gains due to Lisbon treaty, especially in areas of agriculture and fisheries. Thus, the EU now has new powers to become involved in areas where other governments cannot.

However, Ms Wallis stated that she cannot predict at this stage which way the EU will go. In the last mandate on the drilling issue, it narrowly did not back a call for a moratorium. Yet, given these new powers and new reach, there could be interesting times, especially in this area. Finally, she asserted that the EU – and Finland – should not be shy about stating they have an Arctic interest. These are difficult and changing times in the Arctic and we need to come to terms with the fact the Arctic is the centre and symbol of climate change. Thus, everyone has an interest. Indeed, there is a need a more diverse, flexible and modern methods of governing the Arctic.

The first question of the Q & A session concerned Finland’s and the Arctic Council’s stance on observers and the role of the EU, and the possibility of NATO as an observer. In reply, it was stated that there are six permanent observers and with eight applications pending, plus civil society participation. The Council is strengthened by this, but no position reached as yet on observers. As for NATO, the organisation has not applied for such a status, thus shows no apparent interest and therefore cannot be considered.

Similarly, the second question was on outside actors and whether the eight Arctic Council member states should consider the other 60 countries globally that want to exploit the Arctic and admit these as observers. The broad response was that it is preferable to have actors involved rather than not involved.

Next, a member of the audience asked for clarification of Halinen’s claim that there is currently no race for natural resources. In backing the original claim, Halinen stated that after recent incidents in the Gulf of Mexico, the ensuing fallout will see and prolong a more cautious approach to resource extraction.

The following issue raised was of the twin but contradictory aims of environmental protection and economic exploitation. Having been asked to expand on this, Dr Heininen replied that this is a universal, global dilemma. It is mass scale utilisation of resources and the fragile environment that cannot go side by side. Further, acting too early and too quickly rather than waiting for technology induces big risks. Principally, drilling is the main threat as opposed to increased navigation of the region.

Finally, Dr Tiilikainen asked Ms Wallis as to what extent the EU’s Arctic policy has been discussed internally. Wallis expounded that if involved directly in a matter, it makes its decisions internally. Though this poses problems, it is still possible in this context for this approach to be maintained, just as it has been made possible in other fora previously. 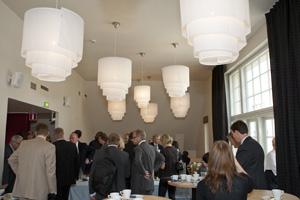 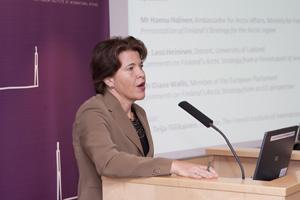 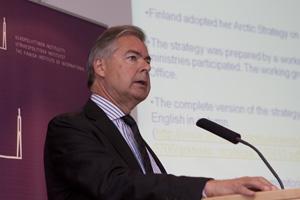 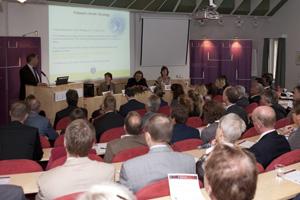 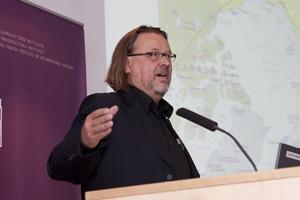 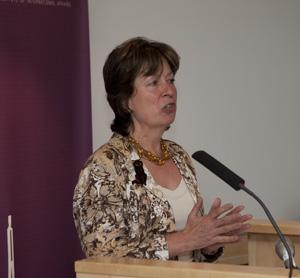