The UPI-FIIA and the Finnish Ministry of Foreign Affairs had the pleasure to host an event with Dr Hans Blix, the former director of the IAEA and UNMOVIC and former Minister for Foreign Affairs of Sweden, to mark the occasion of the publication of the book Kauhun aseet (Weapons of Terror). The book, published originally in English in June 2006 and previously translated into various other languages, is based on the work of the Weapons of Mass Destruction Commission (WMDC), a Swedish initiative chaired by Dr Blix. It contains sixty proposals on how to eradicate nuclear, chemical and biological weapons on a worldwide scale.

The event was chaired by State Secretary of the Finnish MFA Dr Teija Tiilikainen, and comments were delivered by Dr Klaus Törnudd, former ambassador and professor at two Finnish universities.

Dr Hans Blix gave an elucidating speech on the current state of affairs in nuclear disarmament in connection to the WMDC report Weapons of Terror. He shed light into the most important future challenges and also gave recommendations on how to proceed in order to make the world free of weapons of mass destruction.

Dr Blix mentioned that recently there have been some positive developments in the field of nuclear disarmament. However, he affirmed that the ’inconvenient truth’ of Al Gore, the danger of climate change, is not the only one: another inconvenient truth is that the remaining and contemplated new nuclear weapons combined with the recent tensions in international relations also create a deadly global-scale danger.

After the Cold War times, the number of nuclear weapons has decreased from 55 000 to around 27 000 currently but the number of nuclear weapons states has increased by one, North Korea, totalling now nine. According to Blix, there are also problems associated with weapons capabilities of the so-called P5-states (five permanent members of the UN Security Council) and not only with those of rogue states and non-state actors. The first half of the 1990s brought many positive developments in the field of disarmament. However, after 1996, there have been many setbacks. According to Dr Blix, in the recent years, there have been many events that should be seen as wake-up calls, such as the United States’ missile shield proposal, the potential continuation of the British Trident missiles programme, the activities of Russia and China, and the nuclear aspirations of Iran.

All these measures point towards a return to power balancing in international politics. Dr Blix stated that it is, nevertheless, the possession of military means rather than issues of substance that seem to be behind the current tensions. Arms races are both the result and cause of tensions and therefore it is the task of the major nuclear powers to finally take the initiative in both détente and disarmament.

Dr Blix also spoke about the importance of diplomacy compared to a military approach to disarmament. The contrasting examples of North Korea and Iran are good illustration of how carrots have worked better than military threat and humiliation. He stressed the paramount importance a peaceful solution in the talks with both countries in order to prevent dangerous domino effects.

He also proposed an agenda for disarmament which takes the Non-Proliferation Treaty (NPT) as its central element. Dr Blix called for a new and active disarmament agenda for the year 2010, when the next review conference is set to take place. This agenda should concentrate especially on nuclear weapons and strive towards a multilateral cooperative security order instead of a unilateral one.

Dr Klaus Törnudd’s presentation concentrated on covering the most recent developments that have unfolded after the publication of the original report of the WMDC in 2006. He noted that progress in disarmament has been painfully slow. The two central questions have been the nuclear activities of North Korea and Iran, and a lot of energy during the last few years has been spent on these cases instead of focusing on renewing the international nuclear disarmament agenda through the NPT.

Dr Törnudd also briefly covered the fields of biological and chemical weapons by mentioning that while progress has been made in the former field, issues such as overlapping between the categories of biological and chemical weapons and the permanence of regional tensions in the Middle East continue hindering it in the latter. He also stressed the need for Finland to have a consistent policy with regard to issues concerning disarmament; cooperate and coordinate actively within the EU; continue providing experts to international fora, and conduct research in the field. Finally, Finland should maintain active engagement with all levels of society, including the media, the Parliament, researchers and the public in general.

In the discussion part the questions for Dr Blix dealt with a wide range of issues from the expediency of international sanctions to the likelihood of a state ever using its nuclear weapons arsenal. As to the helpfulness of sanctions, Dr Blix argued that in some cases sanctions might produce the desired effect but mentioned the cases of Iraq, where sanctions were either unnecessary (due to the fact that Iraq had already disposed of the weapons after the first Gulf War), and Iran, where stronger economic sanctions might work but military sanctions are mostly producing a negative effect by humiliating the country. As to the function of nuclear weapons merely as a power balancing tool, Dr Blix said that the fact that nuclear weapons have not been used since 1945 is not a pacifying issue. Many close calls have occurred and nuclear weapons are not safe in any hands, he assured. 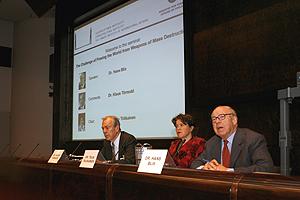 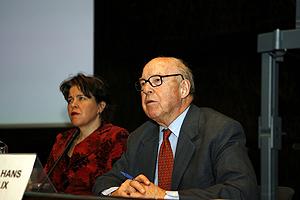 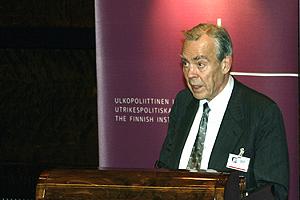