The Finnish Institute of International Affairs publishes a Briefing Paper that aims at assessing Russia’s strategic posture in Central Asia. It discusses Russia’s interests in the region, analyzes Moscow’s policies towards the Central Asian nations and investigates the impact of the ongoing geopolitical competition on Russia’s prospects for retaining the leadership position in the region as well as on the regional countries’ ability to maneuver between the outside great powers.

Dr. Torbakov is specialising in Russia’s policies towards the post-Soviet space. In addition to that he has wide knowledge on nationalism in Russia. Before joining the FIIA, Dr. Torbakov worked at the Swedish Collegium for Advanced Studies in Uppsala, in Jamestown Foundation and Open Society Institute in the US.

Chair: Arkady Moshes, Director of the Programme “Russia in the Global and Regional Contex” at the Finnish Institute of International Affairs

Report of the seminar

Dr. Arkady Moshes opened the seminar by welcoming everyone to the launching of the Briefing Paper.

Dr. Igor Torbakov gave an introduction to the main points of his Briefing Paper. He stated that Russia continues to view the Central Asian region as a zone of its vital security and economic interests. Russia’s principal concern remains the preservation of the internal stability of the Central Asian nations. Russia is also keen to retain as much control as possible over the extraction, transit and access to the world markets of Central Asian oil and gas. Russia also appears determined to maintain its military presence in the region. Russia’s key strategic interest is to reach an accommodation in Central Asia with its two main geopolitical competitors in the region – the United States and China.

In the energy sphere Russia is most interested in gas. Russia has been taking advantage of its monopolistic control of the Central Asian gas market, but now this monopoly position is being eroded by China’s growing appetite for Central Asian energy and China’s readiness to pay a better price than Russia. The result for the Russo-Chinese competition over the Central Asian resources is that the region’s energy-rich nations are getting ready to break Russia’s stranglehold over their gas exports. Also, they have more clout to renegotiate gas prices and make Moscow pay a “real” price for the region’s fuel. Russia’s options in the new situation of the increased competition are either to reform its wasteful domestic energy sector and increase investment in the exploration of the new gas fields or to continue struggling for the dominant position in the region’s energy market. Given the nature of Russia’s own socio-economic system, whose main features are authoritarianism and rent-seeking, Russia’s energy policy in the region is likely to be more of the same.

Dr Torbakov noted that one important aspect of Russia’s Central Asia policy is Moscow’s interaction in the region with other outside great powers. Russia, China and the US have different agendas in the region that are not always compatible. The Shanghai Cooperation Organization is one instrument that Russia and China use for balancing the global hegemon in the region. As a conclusion Torbakov suggested that Russia appears intent on asserting its influence in the region in a more robust way – a kind of behaviour it demonstrated during the recent Russian-Georgian war. In Central Asia, the Georgia conflict gave rise to three main concerns: the possible re-emergence of the border disputes, Russia’s ability to use the sizable Russian communities in the region as a pretext for interference, and Central Asian states’ diminishing room for manoeuvre due to the escalating Russia-West confrontation.

Like Dr. Torbakov, Mr. Petri Salo stressed in his commentary that Russia’s paramount interest has long been the preservation of the regional stability in Central Asia. One major concern for Russia in this matter is the rise of radical religious movements with which Russia must, according to Mr. Salo, work more closely. He also took up the position of South Caucasus within the framework of energy policies. The South Caucasus region per se is not rich in natural resources, but is important in terms of its transit capacity – the fact that Russia, too, obviously takes note of. Mr. Salo noted that Central Asian countries are increasingly becoming independent actors, and they are now more willing (and have more clout) to (re)negotiate the prices for their hydrocarbons. That naturally affects Russia’s ability to preserve its dominant position in the region. Salo also added that the ambitions of medium-size powers in the region, such as Turkey and Iran, are making the situation even more complex. Salo ended his commentary by suggesting that in the long run Russia may opt for more cooperative policies in Central Asia, whereby it might see the EU as a partner.

In the Q&A session, Russia’s regional policies within the framework of the two groupings — the Shanghai Cooperation Organisation and the CIS — were discussed. Dr. Torbakov pointed out that the role of the Shanghai Cooperation Organisation is more important in the region, while the CIS summits serve mainly as a useful platform for discussion amongst regional leaders. In response to the question of whether there is a danger of the new cold war breaking out – specifically in the context of energy, Dr. Torbakov stated that there is no ground for the new cold war at the moment, if only because there are no fundamental ideological differences between the potential adversaries. Mr. Salo also discussed Russia’s suggestions for the new security arrangements. Russia appears to be more inclined to base the relationships on interests rather than on values. But if this is the case, Mr. Salo added, the national interests of the Central Asian countries should also be taken into account. 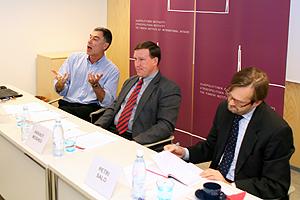 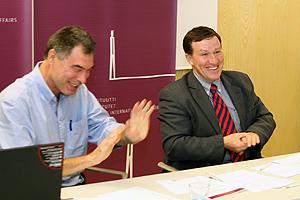 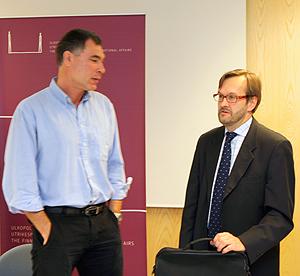