As the ice melts, the Arctic Ocean is expected to reveal substantial oil and gas resources. The unsettled demands concerning the demarcation of the continental shelves under the Arctic Ocean have often seen to lead to a race for resources in the Arctic. Denmark just claimed an enormous area of the Arctic Ocean continental shelf, including the sea floor under the North Pole. The Danish claim will likely overlap with the claims by Canada and Russia, and possibly even the United States. Russia is likely to make its claim during 2015, and the USA, as a non-party to the UN Law of the Sea Convention, may face various practical difficulties in making its continental shelf claim. The seminar discusses why these continental shelf claims are made in the Arctic, and what their importance is. The seminar also asks whether they will deepen the tension between Russia and the West, and whether the claims can be settled in an orderly manner.

Research professor Timo Koivurova has specialised in international law, in particular how it applies to the Arctic. In 2002, Koivurova’s doctoral dissertation ”Environmental impact assessment in the Arctic: a Study of International Legal Norms” was published by Ashgate. Increasingly, his research work addresses the interplay between different levels of environmental law, legal status of indigenous peoples, law of the sea in the Arctic waters, integrated maritime policy in the EU, the role of law in mitigating/adapting to climate change, the function and role of the Arctic Council in view of its future challenges and the possibilities for an Arctic treaty. He has been involved as an expert in several international processes globally and in the Arctic region.

Michael Byers holds a Canada Research Chair (Tier 1) in Global Politics and International Law. His work focuses on issues of Arctic sovereignty, climate change, the law of the sea, and Canadian foreign and defence policy. He holds major research grants from ArcticNet and the Social Sciences and Humanities Research Council of Canada. Dr. Byers has been a Fellow of Jesus College, Oxford University, and a Professor of Law at Duke University. He has also taught as a visiting professor at the universities of Cape Town and Tel Aviv. Dr. Byers is the author of the book ”Who Owns the Arctic? Understanding Sovereignty Disputes in the North”.

The seminar was opened by its chair Mr Jyrki Kallio who stressed the importance of the topic and said that due to the race for the resources there is a growing interest in the Arctic both globally and in Finland, because Finland is also an Arctic state.

The first speaker Dr Timo Koivurova contemplated the question why states are claiming large areas of seabed in the Arctic Ocean and also whether a race to the resources is really going on. In his view there may be a perception that climate change, which will reveal natural resources in the Arctic, could lead to states trying to grab as much of the seabed for their companies as possible. This could escalate into tensions between the states. However, so far states have eagerly followed the rules set out in the law of the sea, and states have also been able to act together. Because of the cooperative spirit, Dr Koivurova stated that claiming large areas of the seabed cannot be explained by a race for resources, but in fact the claims are due to the strong legal development that takes place around the world.

Dr Koivurova remarked that ocean governance has faced dramatic changes since the Second World War. Before the war there were only narrow territorial seas for coastal states, and all other maritime space was freely accessible for all the states and vessels. After the Second World War, the coastal states started to assert more expansive claims over maritime areas near their shores and increased their presence in their adjacent maritime areas. Legislative actions also took place, first with the UNCLOS I (United Nations Conference on the Law of the Sea) resulting in four treaties concluded in 1958. The UNCLOS III that is possibly the most ambitious legislative package and can be called the constitution of the oceans was negotiated in 1973-1982.

According to Dr Koivurova, previously there was no need or will for the claims, but at the moment there are 102 actual and potential submissions made by various states in the Commission on the Limits of the Continental Shelf (CLCS) that is dealing with the issue. This submission queue in the CLCS could lead to tensions between the coastal states in the Arctic Ocean as there are probably various overlapping submissions. Dr Koivurova underlined that the Arctic states are aware of the issue and have agreed to settle the overlapping continental shelf claims in an orderly fashion.

According to the second speaker Dr Michael Byers, many people have difficulties understanding that all the land issues in the Arctic region have been settled and that Hans Island is the only disputed area. This dispute is between Denmark and Canada, so it is a risk-free sovereignty dispute that is unresolved because of domestic politics – in fact, according to Dr Byers much of what is going on in the Arctic area has to do with domestic politics. The dispute between Denmark and Canada arises only when elections are approaching. Furthermore, Dr Byers highlighted that the planting of the Russian flag in 2007 to the seabed in the Arctic can be seen as part of the election campaign of the person who planted the flag, and thus related to domestic politics. This means that there are no real disputes, and the coastal states are acting in cooperation. This, according to Dr Byers, is no wonder as the rules concerning the Arctic were mainly negotiated by the three biggest Arctic coastal states: the Soviet Union, the United States and Canada. That is why the rules are fantastic for the purposes of those three countries.

To concretise the fact that there have not been disputes between the coastal states, Dr Byers mentioned the recent continental shelf claims. Russia made a submission in 2001 but did not include in it all the area that would have been scientifically or legally justified to include. According to Dr Byers this was a political compromise, an invitation for other countries to also limit themselves. In 2014, everyone was surprised when Canada suspended its submission on continental shelf. It came to the conclusion that a wider area should be claimed. Dr Byers argued that this was due to domestic politics, and that Prime Minister Stephen Harper did not want to give up the North Pole during his term. Even the situation in Ukraine has not raised tensions or derailed the process: for example when Denmark claimed its submission on continental shelf, Russia issued a press release were it stated that Russia has been fully involved in the negotiations and fully aware of the claim. Russia also agreed on the area of the submission. According to Dr Byers, this means that President Putin chose not to make a problem out of it. In conclusion it can be said that when it comes to continental shelf claims, everything is occurring in accordance with international rules. 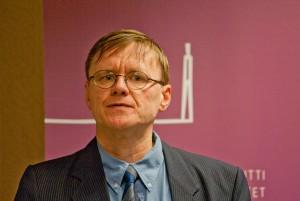 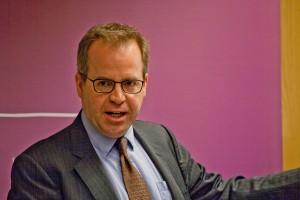 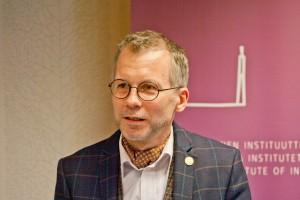