Framsida / Evenemang / Germany and Finland together for a better Europe
Dela med andra
Dela med andra
Germany’s policy choices are in the spotlight when it comes to the development of the future of the European Union. Especially the fiscal and economic crisis of the recent years has put Germany’s ability to lead together with its partners in Europe to the test. First reforms of the economic and monetary governance of the EU, including a Banking Union, have been launched in Brussels. However, the debate on the future development of the European integration project continues. Meanwhile, the foreign and security policy of the Union has received new attention following the Ukraine crisis. How can the common economic and fiscal policy be deepened, while preventing new dividing lines within the EU? How can the EU enhance its capability as a global actor? European capitals more and more turn their eyes to Berlin, to find answers to these and other questions.
Speaker:
Michael Roth, Minister of State at the Federal Foreign Office of Germany
Comments:
Mari Kiviniemi, Member of Parliament and Former Prime Minister of Finland
Chair:
Juha Jokela, Programme Director, the Finnish Institute of International Affairs
Summary of the seminar:

The seminar aimed to identify the currently most challenging tasks relating to the future of Europe – namely tackling the sovereign debt crisis and reacting to the developments in the Ukraine – and the prospects of potential solution strategies, particularly also in terms of an even closer relationship between Germany and Finland. In his opening remarks Dr. Juha Jokela outlined that even though the prospects regarding the economic situation in the EU seem rather positive at the moment, the situation is in general still fragile, especially when the deepening differentiation between the member states is taken into account. This challenge is intensified by the call for common action regarding the worrying tide of events in Europe’s Eastern neighbourhood. The position of the recently new elected government of Germany is in these terms of very high interest for Finland and the future of Europe in general.

Minister of State Michael Roth opened his speech by emphasizing the important and close bonds between Finland and Germany, which were deepened through fruitful meetings with the Finnish minister for European Affairs and Foreign trade Alexander Stubb and the Finnish Minister for Foreign Affairs Erkki Tuomioja while his first official visit in Helsinki. The two countries are not only crucial partners in defending common interests, but they can also learn for one another: For instance minister of state Roth mentioned the internationally recognized, excellent Finnish education system.

With regard to Europe Mr Roth focused on three central questions in his speech: The first one referred to the economic crisis in Europe and the lessons learned from it. The second evaluated the impact of the critical situation in Europe’s Eastern neighbourhood, while the last one dealt with prospects and opportunities for a Finnish-German cooperation to face these challenges.

As it comes to the first issue, even though economic indicators show that Europe is constantly recovering, the unemployment rates are still unacceptably high throughout the Union. This shows that important steps like the establishment of the ESM and the Banking Union were taken, but at the same time the response to the sovereign debt crisis must be more comprehensive and thus can not only rely on austerity and liberalization. It is therefore crucial to promote an economic and politically strong Union by ensuring social cohesion and protection. One meaningful tool in these terms is the Europe 2020 strategy which aims at an employment rate of 75 %, including structural reforms in regard to labour markets, pension schemes, youth encouragement and gender equality. Finland has a lot to offer in this sense, presenting a role model of how to rebalance the state budget without causing a downturn in the welfare state system. In general, it is important to emphasize that Europe must be seen not as a part of the problem but of the solution.

In terms of the second question, minister of state Roth identified the crisis in the Ukraine and the Russian annexation of the Crimea as the most pressing challenge in terms of foreign policy, which require a thoughtful common response, not only promoted by the Weimar triangle consisting of Germany, France and Poland, but all 28 member states. New threating steps of Russia must be faced with new sanctions and actions from the EU. Mr Roth emphasized in these regards the traditionally close connection between Finland and Russia, as the two countries share a remarkably long border and interrelated history. One has therefore to admit that even though Russia will be hit hardest by the imposed sanctions, these will have unequal consequences for the EU member states. This calls for solidarity throughout Europe and the urgent need for a diplomatic solution of the crisis. A close cooperation between Finland and Germany is in these terms very desirable, as both are members of the Baltic Sea region and its council: This cooperation on the civil society level implies the message for Russia that the door for diplomatic negotiations is still open.

In addressing the third question Mr Roth mentioned that the example of sanctions against Russia and their unequal consequences point to the thread of a more and more differentiated Europe. To counter this development, there is an urgent necessity for enhanced cooperation and the exchange of best practice models to take full advantage of Europe’s potential. Finland can in this sense be considered as a role model for the building of a progressive and citizen-orientated society. The main task for Europe lies in a successful promotion of its values not only outside but also inside the Union. Therefore it is essential to advance a new vision of the EU that offers the right balance between supranational decision-making and subsidiarity in order to regain the trust of its citizens. Strengthening solidarity and social cohesion on the one hand and taking more responsibility on the international stage on the other hand are crucial steps in making Europe better. Both are in Germany’s as well as in Finland’s vital interest and thus should be taken together.

In her comments the former Finnish Prime Minister Mari Kiviniemi emphasized the special importance of the subject considering that the elections to the European Parliament will be held in May 2014 and a new European Commission will be appointed in autumn this year, calling also for a new general agenda on the European level. With regard to the economic development of the Union, although the prospects are rather optimistic, common effort is needed in order to stabilize this still vulnerable status quo. Therefore it is important to ensure the implementation of the new measures and tools in the framework of the currently existing treaties. In contrast to what minister of state Roth outlined, Mrs Kiviniemi also sees in Finland an urgent need to catch up in terms of structural reforms. An equal amount of attention is required when it comes to strengthening the European Common Security and Defence Policy (CSDP) as the recent developments in Europe’s Eastern neighbourhood show. Mrs Kiviniemi identified in these regards three crucial preconditions to achieve this goal. Firstly, it is very important to enhance the European External Action Service and its cooperation with the member states in order to ensure that it can provide leadership in implementing a comprehensive, jointly developed strategy. Secondly, in order to speak with one voice and thus being heard on the international stage, the cooperation between the member states themselves has to be improved too. This means that small states need to have a say, but at the same time big countries like Germany and France should provide visible leadership. The recently promoted shift of the newly elected German government away from the traditionally rather moderate approach is in this sense to appreciate. Thirdly, Mrs Kiviniemi stated that the recent developments in Ukraine reflect the European economic crisis in a different dimension: Both of them put Europe to the test and both of them will hopefully result in unified action and an even stronger European Union.

At the end of the seminar the floor was opened for questions and comments from the audience. For instance it was discussed how European values can be successfully transmitted in the public. Crucial in this regard is that populist strategies are not copied by the main stream parties, Brussels is no longer used as a scapegoat for European failures by the member states and a new strategy of a European self-restraint can be established. Moreover, Germany’s potential contribution in strengthening the CSDP was addressed. In these terms, Mr Roth emphasized the importance of an integrated common European strategy. This requires the appointment of an actual political leader as a successor of Lady Ashton in the post of the High Representative, who focuses on a clearly limited set of challenges. Finally, Germany’s prospective approach towards Russia was of high interest in the debate due to close business connections and energy dependence. Minister of state Roth underlined in these regards the importance of a diplomatic solution of the conflict, but at the same emphasized that further sanctions will be imposed if necessary. 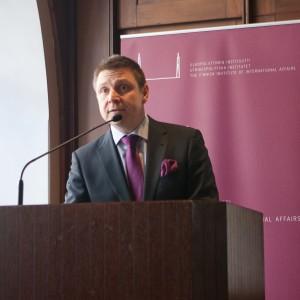 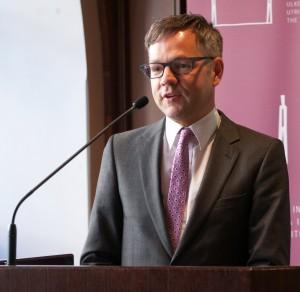 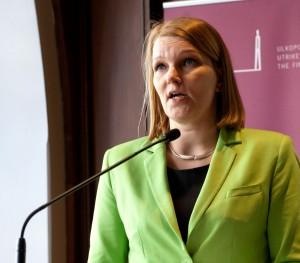