No single country is safe from the ongoing global financial crisis. In addition to its far-reaching
economic ramifications, the crisis has also put a strain on many political systems across Europe.
Lack of public support and even crisis of political legitimacy have caused increasing concern in
many EU member states. What are the key economic and political challenges facing Hungary and
Northern European countries like Finland, Sweden and Estonia? And wherein lie the prospects
to emerge from the crisis in these EU members?

According to the key-note speaker, Mr Gordon Bajnai, the ongoing global financial crisis came to different countries and regions as an uninvited guest with both global and tailor-made local messages on what had gone wrong in the economic policies. The speaker saw the root cause of the European crisis in the half-hearted integration beginning with the Coal and Steel Community. The driving principle behind the European integration process is the seeking of the smallest common denominator. Politicians want to agree on easy issues and avoid difficult ones by postponing them to a later stage. Without this dynamic, European integration would not have progressed as far as it has until now. But it also means sub-optimal solutions. When the monetary union was created,  the benefits of the common currency were easy to see, but fiscal union has been a lot more difficult to achieve. Also, the Lisbon Strategy on competitiveness (2000) had unrealistic goals and decision makers did not seriously consider what was needed. But integration can only go forwards.

The markets have now first realized that in the European crisis it is not possible to solve problems via national capitals of member states. The only way forward is through Brussels. The EU has responded to the crisis in the typical European way: too late, too little. After the decisions made in December, the EU has clear answers to the question of how to avoid the next crisis, but it has no idea how to survive the present one. The markets are interested only in the latter. The EU will continue to move from crisis to crisis until there is an answer to the crisis of today.

In reality, Europe faces two crises: fiscal imbalance and relative decline in the European competitiveness. The solutions offered to help with the budget deficits are austerity measures and structure reforms. Both sound very positive, but in real life they mean risks for democracies. The situation is similar to the 1930’s. If both of these measures are taken, as demanded by markets, the next crisis with democratic legitimacy will arise. The politicians have their mandates from voters on the one side, but accountability to the other 26 Member States and the Commission.

The EU and the world are facing five trends: (1) growth globally will be lower than in the past 20 years, (2) societies will experience a reverse mobility from lower middle class back to poverty because of jobs and cheap loans disappearing, (3) generational conflict caused by demographics, (4) global rebalancing of resources and (5) the typical political reaction of increasing populism and nationalism, risk to peaceful growth.

The speaker considers the EU’s Eastern enlargement a major success. It has added significant value in markets and growth. A large part of investments could be kept in Europe. Political and economic systems can be changed in the period of months or some years, but it takes decades to change a society. 22 years have passed since the collapse of the communist regimes in Eastern Europe and its development has not been linear. Not everybody has benefitted from the change equally. Hungary had a long period of good development, but now the trend has changed and the development is not so good. However, the Eastern European countries have chosen the Western European model for good. Governments should make the unavoidable suffering related to reforms as short as possible, minimum in size and worthwhile. A more cohesive and democratic Europe is our common responsibility.

The second speaker, Dr Pekka Sutela stated that economists must be modest when talking about money and financial crises. The Economic and  Monetary Union (EMU) was earlier seen as problematic because of the economic heterogeneity of the member countries. The fundamental problems however turned out to be very different. We still don’t know what makes money tick, where credibility comes from and where it goes. The Euro is issued by a committee which is unable to make optimal or quick decisions. Unfortunately, the Europeans have not been able to decide what kind of outcome they desire. The beginning of the monetary history of the United States was similar with monetary crises every ten years and institutional changes. The EMU does not need to repeat all those mistakes, rather, it will hopefully learn from them.

One vehicle for increasing its credibility has been the establishment of the European Central Bank. Another vehicle is rules. They are always arbitrary, but when they are set, they should be followed. But they are not followed. The deficit criteria are the same for all, no matter what the fiscal situation of the country. There is the never-ending debate on the measuring of growth and extra budgetary funds. Should monetary and fiscal policies be combined or kept separated? Crises are never caused by only one factor. Other contributing factors are the surpluses of oil producing countries and China. They were invested in the new financial market instruments. There was and still is an ideological unwillingness to supervise these instruments. The financial crisis of the US spread to Europe as well because of the many connections between the two. These surpluses will continue to exist and they need to be invested in the future as well.

It is interesting to note the difference in discussion about the EMU membership in two particular countries. In Sweden the question was whether common currency would be good for Europe. In Finland the issue was whether Finland should be part of the currency, whose establishment was taken as a given. The Nordic countries are also a very interesting test case. Denmark has its own currency with a fixed rate since 1987, Sweden has its own currency which has been floating for a long time and Finland is an EMU member. Globally speaking the economic performance of all three small, open economies has been identical. It seems that the independence of currency doesn’t matter. However, the situation in some smaller countries e.g. Estonia, is quite different: it does make sense to fix the currency into the EMU system.

The speaker emphasized that the Euro is worth saving. According to Adam Smith, the division of labour in the economy is limited by the size of the market, and the division of labour is the basic source of economic growth and welfare. It is not important whether all EU Member States join it or not. It would help to know what we want.

The third speaker, Ms Tuija Brax, MP, added more reasons for the present crisis. There is lack of good governance and wide spread corruption. There is a lack of taking seriously promises made in Brussels and explaining them at home. Finland insisted, successfully, on including the EU citizens’ right to good governance in the European Charter on fundamental rights. But it seems that the rules are not taken seriously. Ms Brax admitted that in the EU enlargement process there has been lack of Copenhagen criteria and the enormous corruption in Europe is the elephant in the room – it is not discussed, but everyone sees it. Discussion should be taken back to trust instead of avoiding the subject (principle of not naming and shaming). Finally now in the case of Hungary something is being done by the Commission. Ms Brax thinks the same should be done with regard to other shortcomings of governance, e.g. access to information, statistics.

It was pointed out by the public that the economists’ worry about the diversity of the EMU member countries was justified as shown by the discussion on the competitiveness of Greece.

A question was posed on the reasons for the deep division in the society of Hungary. According to Mr Bajnai since year 2000 several Hungarian political parties started building diving lines in society in order to build support for themselves. This division filtered through all society in a very non-constructive way. He also pointed out that populism is in no way a Hungarian phenomenon. There are many signs of it in many countries with long democratic traditions.

In addition to the crisis Mr Bajnai pointed out the serious mistakes of the previous Hungarian government as well as the irrational populist messages of the then opposition as the reasons for the Fidesz Party’s success in the 2010 parliamentary elections. The change in the politics of Hungary must come from inside. Outside interference, including sanctions, would be very negative and abused by anti-European populists. Hungarians didn’t need to struggle for too long for democracy. It is like air: not noticed when you have it, but you start choking when it isn’t there. The present crisis can make Hungarian democracy stronger in the long run.

Mr Bajnai was concerned about EU split and two-speed Europe. He prefers keeping Europe together. However, the speed should be fast enough so that integration does not lose momentum. Dr Sutela thinks one or two speeds does not matter as the example of Denmark shows. However, the UK is different. It makes a lot of sense for Britain to refuse imposing financial transaction taxes. The taxes could kill a major British export industry. He welcomes the British stand.

Competitiveness is a major issue and the responsibility of national authorities. For a small country like Greece it is difficult to find a competitiveness edge. It is also one reason why Greece should stay in the EMU. Maintaining the banks should be the responsibility of the European Central Bank. After several years of financial regression we will face high inflation for many years. Economic growth will continue to be very slow.

Ms Brax mentioned demographics as an important and urgent issue to solve. In Finland it seems very difficult to solve the question of pensions. Mr Bajnai agreed that fundamental reforms have to be done quickly also in Hungary as in most other European countries. In addition to pensions, decisions on policy of immigration need to be made. 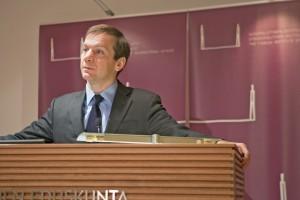 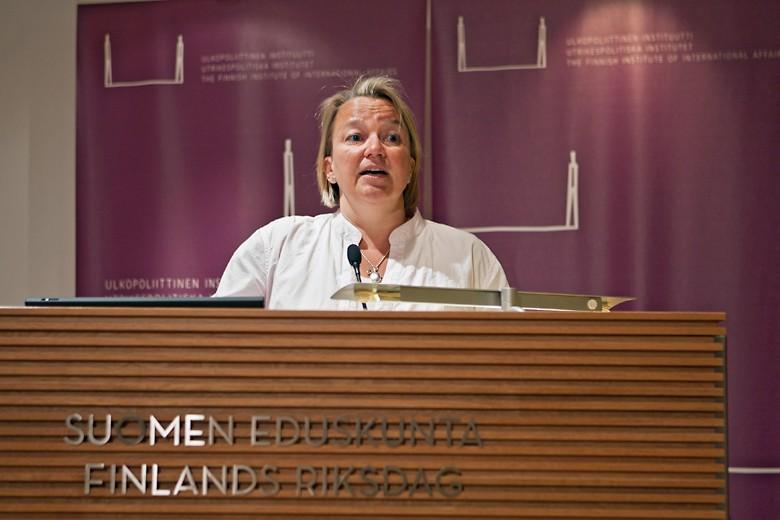 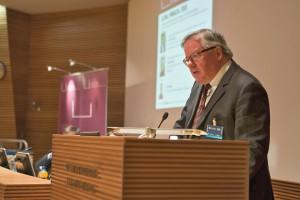 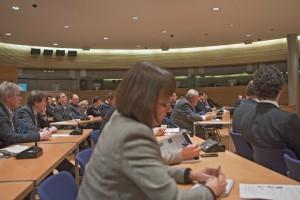 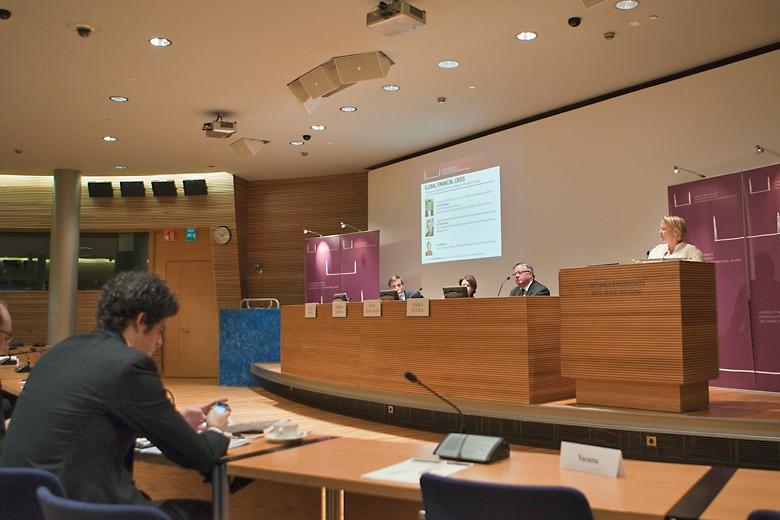