How far NATO will further expand?
Cooperation and Conflict between the Expanded NATO and the Russian Federation

During the six decades of its existence NATO has been expanding its territorial, demographic and economic mass in many stages. Looking back at the NATO enlargement decisions in 1997 and 2002, contested by the Russian Federation, the expansion rejuvenated the alliance and produced positive effects in Europe. Although the Alliance has contributed significantly to the overcoming of ideological antagonisms in Europe, the antagonism between the U.S. led West and the Russian sphere of influence has not disappeared with the fall of communism. It rather took a milder form, a mixture of cooperation and conflict. This relationship will largely determine the likelihood of NATO’s further expansion into Ukraine and Georgia.

Speaker:
Prof. Anton Bebler
Professor of Political Science and of Defence Sciences, University of Ljubljana
Prof. Anton Bebler has taught at the University of Ljubljana since 1972 and has been a visiting scholar at various international universities and institutions. Prof. Bebler has also served as Ambassador and Permanent Representative of Slovenia at the UN Office in Geneva. Since 1997 he is President of the Euro-Atlantic Council of Slovenia and in was Vice-Chairman of the Atlantic Treaty Association (ATA) in 1999 – 2002.

Comments:
Dr. Risto E. J. Penttilä
Director, Finnish Business and Policy Forum EVA
Prior to his current position Dr. Penttilä worked for Oxford Analytica in the UK and for the World Economic Forum in Geneva. He has also been a Member of Parliament and adviser on international security affairs to the Finnish Minister of Defence. He is also a Fellow at the University of Oxford and Secretary General of the European Business Leaders’ Convention.

Chair and welcoming remarks by Prof. Raimo Väyrynen, Director of the Finnish Institute of International Affairs.

Professor Raimo Väyrynen welcomed everyone to the discussion and introduced the topic and delight to have Prof. Anton Bebler to give presentation on Nato’s expansion.

Professor Anton Bebler noted that Nato’s expansion is a complicated and touchy matter for many European governments for various reasons. Relations to Russia are essential in this. He stated that within Nato the term ‘enlargement’ is preferred over ‘expansion’. The Professor gave an overview on Nato’s enlargement process and its historical developments and trends. Through its existence, Nato has expanded in many dimensions; geographically as well as an administrative organisation. From humble beginning in 1949, Nato has become an impressive international organisation with own diplomatic missions and relations to various international organisations and governments worldwide.

Bebler emphasised that from the very beginning all membership criteria have not been decisive. During cold war enlargement, political and ideological criteria, stated by the U.S and Canada (democracy, individual rights and rule of law), were secondary to military and strategic considerations. For instance, Portugal and Turkey were both accepted into the alliance without fulfilling the stated criteria. After the cold war, political criteria became more significant in a new situation where many former Soviet satellites were asked to join the alliance. The application process and screening became more complex, which made membership more difficult to obtain than in the cold war days.

In more detailed overview, Bebler categorised Nato’s Eastern expansion after the fall of the Berlin wall 1998-90. Overall, Nato’s Eastern expansion took four phases starting from the absorption of DDR in 1990 to the entering of Croatia and Albania into the alliance in 2009. The “Big Bang” of Nato’s enlargement in 2004 was the single most drastic expansion to the East. In this phase, Bebler pointed out, the question of the Baltic States and their defence were the most crucial. Bebler pointed out that September 11 attacks and Putin’s then more pro-West approach enabled Nato to expand into former Soviet soil. This created many unanswered strategic questions

Currently Nato’s further expansion is “on ice” mostly because of the recent war in Georgia, Bebler remarked. Further enlargement in the Balkan region is to be expected within 2-3 years (Macedonia and Bosnia-Herzegovina) but the big issue over Ukraine and Georgia remains vague and frozen. Bebler sees considerable opinion differences between the U.S and Western European members regarding Nato’s further expansion to the East. Germany, France and many other European members want to freeze further enlargement, which is supported by the U.S. This was evident in the Bucharest summit in 2008. The Russian reactions are a real concern to many European members.

Bebler concluded that the development in Eastern Europe from 1990 to the present, in the region’s integration to the West – first through Nato followed by EU – is no longer necessary. This was a pattern, which the U.S used to push Western Europe to accept former Soviet satellites into the EU. Nato membership – and Nato’s further enlargement – is not required in order to integrate Ukraine and Georgia among others to the West. Bebler pointed that wider integration without direct military alliance is more productive in this region. There can be seen “natural limits” for Nato enlargement, which is according to Bebler, a shared opinion among many in Western Europe.

Dr Risto Penttilä commented on Bebler’s presentation with three points; general attitude towards further expansion, Russian mood and possible enlargement patterns. In the current post-Georgian blues, Nato lacks good new ideas for its future said Penttilä. Further, economic downturn has made Nato a less important agenda for the Western world. After the war in Georgia, Nato’s enlargement to the East is widely seen as a unwanted and unlikely scenario.

Penttilä pointed out that the expansion of Nato could happen in the North through Finland and Sweden, which are not -like Ukraine and Georgia – part of Russian sphere of interest. According to Penttilä, as pragmatic countries with good understanding of Russia, Finland and Sweden would improve Nato-Russian relations within the alliance.

Penttilä painted two possible scenarios for Nato. Nato could become a channel of consolidation of the West in the new emerging world order, when more Western countries might join the alliance. Another possibility in the future according to Penttilä is the “End of the West scenario”, where Western countries would seek direct and deeper co-operation and markets with emerging Asian powers (especially China) so that becoming a member in Nato would no longer be relevant. This would halt Nato’s expansion and diminish its role.

In the Q&A session Prof. Väyrynen raised the contradiction between Nato’s different roles and their impact in the work and expansion of the alliance. He stated that Nato, as a military alliance, liberal value community and crisis management organisation, is facing difficulties defining its role and policy. Bebler replied that there is a growing demand among many Nato members to re-check collective defence capabilities stated by the famous article 5. There is a growing feeling especially among Eastern European members that Nato has gone too far from its core essence as a collective defence alliance. Bebler also pointed out that war in Afganistan might have been a mistake for Nato and the greatest gainer is actually Russia as “the threat of radical Islamists at its Southern border has been weakened.”

The “German syndrome” was also raised, describing Nato’s policy towards expansion. After becoming a member or as the country’s primary goal is achieved, the willingness for further enlargement erodes, like in Germany after 1990. One topic to be discussed was the danger of an “open door” policy – a hollow promise to Ukraine and Georgia to become members in the future without a real will to achieve this. Dangers of empty promises may cause frustration and disappointments in applicants leading to counterproductive development in the region. Ukraine and Georgia may face a similar situation that Turkey has in its EU bid. 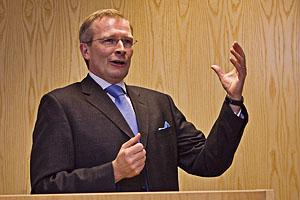 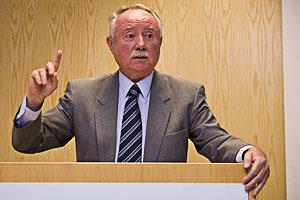 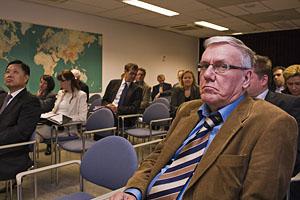 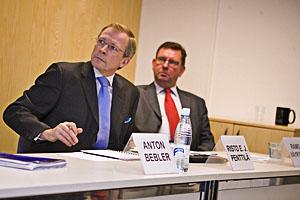