The EU has become increasingly involved in civilian crisis management operations. Commitment to long-lasting state-building is considered a major tool for managing regional security risks. Kosovo and Bosnia-Herzegovina are interesting cases as these small areas host a number of crisis management missions and actors. Today the EU strives to map its achievements in the Balkans. Will the post-Lisbon time bring more comprehensive tools to addressing the remaining challenges?

This seminar marks the launch of a FIIA Briefing Paper on EU Civilian Crisis Management in Kosovo by Dr Tanja Tamminen.

Mr Jari Mustonen, Head of Research and Development at the Crisis Management Centre Finland (CMC), opened the seminar with his welcoming remarks. He introduced the training, recruiting and research functions of the CMC and underlined the importance of events such as this for the improvement of the effect of crisis managements operations.

Before introducing the speakers of the seminar, Dr Teija Tiilikainen, Director of the Finnish Institute of International Affairs (FIIA) noted that the idea of the seminar was to bring together the discussion on the crisis management operations and discussion on the development of the EU’s capabilities in this field. She also introduced the FIIA Briefing Paper “High expectations, limited resources:The bottlenecks of EU civilian crisis management in Kosovo”, written by Dr Tanja Tamminen, Researcher at the FIIA, and one of the speakers of the seminar.

Mr Mika-Markus Leinonen, Director and Civilian Capabilities Adviser at the General Secretariat of the Council of the European Union, stated that he was not representing the Council Secretariat at the event but would attempt to identify some of the key lessons on EU civilian missions in his own personal capacity as seen from Brussels perspective. He said that the Western Balkans were an excellent place for the EU to learn about CSDP tools but also to draw wider lessons on the EU as an actor in security sector reform. According to Mr Leinonen looking at lessons identified/learned is a useful exercise to do at this very moment as major restructurings are taking place at the moment in Brussels to implement the Lisbon Treaty. He went on to identify some key lessons from two missions: EUPOL Proxima (EU Police Mission in the former Yugoslav Republic of Macedonia) and EUPM (EU Police Mission in Bosnia & Herzegovina). According to Mr Leinonen, EUPOL Proxima suffered of an identity problem as its organisational structure was not in sync with the content of the mandate at the start of the mission. This led to mixed expectations. He also thought the mandate may have been too soft for a CSDP mission. As to the mission in Bosnia, Mr Leinonen noted that it had proved its value as a flexible tool since its mandate had been adjusted several times. He said that while the mission had had genuine impact on rule of law, any further reforms in the country would be propelled by other than CSDP-related motivations. He noted that some major problems were common to both these missions. The missions have been continuously understaffed and the seconded experts did not always have the relevant skills required to fulfil the tasks as defined in the mandate of the EUPM. Interface with the Commission had also been problematic at times. Mr Leinonen was of the view that the EULEX Kosovo mission was too short-lived to identify lessons at this point on its performance and impact. Although the planners of the CSDP missions had clearly learned lessons of some of the past missions, some common problems remain, including challenges regarding recruitment and quality of staff. He noted that CSDP as a crisis management instrument had not fully matured and shown its full potential even after various deployments. Mr Leinonen therefore wanted to stress the importance of learning better from the past deployments and apply those lessons to new ones. For example, staffing for missions both in terms of number and quality s well as missions support functions need to be improved. He also noted it was essential that the EU coordinate its multiple instruments in a better way for better impact and visibility on the ground. After ten years of CSDP, it is now time to go back to its roots as a crisis management tool and not a driver of policy.

Dr. Ana E. Juncos, Lecturer at Bristol University, also said the Western Balkans were a testing ground for EU civilian crisis management and as such were very important through the lessons learned. In her presentation, she focused on the lessons of the EUPM in terms of coherence and effectiveness. EU’s fragmented presence on the ground created serious challenges in terms of coherence. Problems of internal coordination, communication and leadership stemming from frictions related to personalities also led to tensions between the mission and local authorities. According to Dr Juncos, the most serious problem was the coordination problem between the military and the civilian elements of the ESDP, in other words between the EUPM and the EU military operation, EUFOR Althea. Although the mandates and practises of the two missions were different, there were some grey areas and tensions between the missions. This showed the EU’s difficulty in planning a comprehensive civilian and military approach to crisis management. However, Dr Juncos noted, coordination has gradually become better but the comprehensive approach is still more conceptual than actually in practice. As to the effectiveness of the EUPM, Dr Juncos said that the greatest challenge to the mission’s success came from contextual, local factors, namely the legacy of the war, which included organised crime and corruption. According to her, there was not enough knowledge on how this legacy was going to affect the mission. The effectiveness of the EUPM was further complicated by some EU-related factors, namely the inexperience of the EU in crisis management and the lack of resources. Being the first ever police mission of the EU, the EUPM had to learn everything from the beginning. The mission also faced serious recruiting problems and the quality of the officers suffered from lack of expertise and language skills. Mission officials also had problems in implementing the mandate, as it was vague and ambiguous. She noted that in general, the demands of the recipient countries are not taken into account enough and that local ownership and sustainability of the missions’ goals need to be focused on more. She also said that important challenges remain with regards to the clear formulation of concepts and strategies in civilian crisis management at the EU level. Member states may be more willing to provide financial and other resources than in the beginning of the missions, but the institutions cannot do much as long as the strategy and concepts are not clear. She also said some of the disappointments of the missions were due to the failure of the technocratic approach as technical improvements are very much political issues and should be acknowledged as such by the EU.

Dr Tanja Tamminen focused her presentation on the EU Rule of Law Mission in Kosovo (EULEX Kosovo) and the overall impact of the EU in Kosovo. First of all she made a note on the enormous number of international representations currently present in Kosovo. The EU has added to this confusion through naming a number of representatives and facilitators to Kosovo. Due to the fact that the member states are not united in their stance vis-à-vis Kosovo’s status, EULEX Kosovo has been declared a “status neutral” mission of a “technical nature”. However, Dr Tamminen noted, many of the rule of law problems are connected to the political issue of Kosovo’s status and can’t be solved by technical means only. The EULEX mandate is to assist the local authorities in the developing and strengthening of the police, custom and justice systems. The responsibility of the reforms lies in the hands of the local authorities, while EULEX monitors and measures the progresses made. David Chandler has called the EU an “empire in denial”, one which pushes forward its own reform agendas without really taking responsibility for their effects in the region. Because of the lack of local ownership for the reforms and the ambiguous position of the EU towards Kosovo’s status, the local population easily blame the EU for the lack of progress, which according to Dr Tamminen will in turn permit the same people to stay in power after the elections in December. She stressed that there have been some important achievements as the police and custom officials are now more professional and the monitoring of the justice system prevents the most flagrant cases of corruption. However, all in all progress has been slow due to the EU lacking all genuine carrots and sticks to encourage and pressure local authorities to advance and support the institution-building. Dr Tamminen went on to argue that Kosovo’s isolation must end in order for Kosovars to be provided the same European options in travel and study as the other Balkan nationals have. In the current context corruption and nepotism will continue to prosper and make sense for the locals who are left without other options. Dr Tamminen concluded by assessing the EU achievements to continue to be limited since other policies do not follow. She also noted that good results in some fields of rule of law could lead to a hasty wrapping up of the EULEX mission, but that this would not serve the long-term sustainability of the achievements. 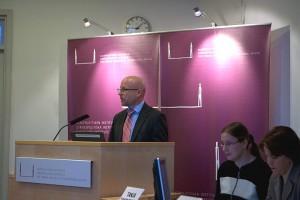 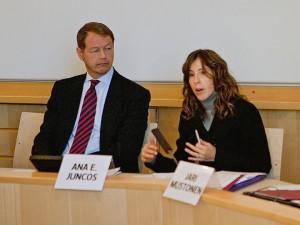