Robust economic growth since the early 1990s and an important strategic position have generated images of India as both an economic giant and a key global power. In addition, New Delhi’s ”turn to the East” and increasing involvement in the East Asian regional architecture have led to widely-held views of India as a potential counterweight to China. At present however, the impressive growth of the Indian economy seems to have ended, and strategically the country is caught between close security ties with the US and Asian countries on the one hand, and cautious restraint vis-à-vis China. From a European vantage point, India’s ”strategic partnership” with the EU, in place since 2004, continues to punch below its weight. This seminar assesses the nature and prospects of an enhanced role for India in Asia as well as globally, in the light of China’s rise and the US re-engagement in Asia. Furthermore, the seminar will address the question how the EU’s relations with India can be upgraded to form a mutually-beneficial partnership which both partners can recognize as strategic.

Dr. Teija Tiilikainen, Director of the Finnish Institute of International Affairs opened the seminar on India as an economic power and its role in the world as seen from the EU by welcoming the participants. Dr. Tiilikainen commented that FIIA has hosted many events on Asia and China, and is now finally able to host a seminar on India, one of the strategic players on the global scene and a key emergent power. Thanks to Bart Gaens, FIIA now has this opening and hopes to do more in the future, Dr. Tiilikainen said.

The acting head of Global Security Research Programme Dr. Bart Gaens also welcomed everyone to the seminar examining whether India is a key global power regionally and as a partner for Europe, or not .The picture may look negative Dr. Gaens noted. There is a lot of poverty despite the growth of India’s GDP, the trade talks between the EU and India have broken down, and there has also been a cooling down of political relations with the EU. China’s rise has eclipsed India’s, and China is more important to the EU trade-wise. What could be done to upgrade the EU’s relationship to India and how important India is as a ”global swing state” are issues the speakers will shed light on more, Dr. Gaens said.

Professor Anita Inder Singh, Visiting Professor at the Centre for Peace and Conflict Resolution in New Delhi was pleased to speak about India’s strategic role on her first visit to FIIA. She began her presentation by saying that military power is an important factor in India, which is why China and the US are important actors in Asia, and the EU not as much.

Since 1947 India has seen itself not as a mere military power, but as a country with much to contribute. This self-view might be a bit exaggerated considering geopolitics and Indian resources, Professor Inder Singh said. Other countries would like to see India doing more to halt China’s military growth. The growth rate of Indian GDP since 1981 made it more attractive to many countries in Asia, Europe and the US. India managed to reconcile economic reform with regional nationalism through democracy, which authoritarian regimes such as Yugoslavia and USSR failed to do and collapsed in 1991, Professor Singh stressed. The US has seen democratic India since 1947 as a counter-voice to communist China, and Washington continues to drive and support a larger role for India in Asia, said Professor Singh. There are strategic differences between India and US though. When the US speaks about pivoting to Asia it seems to concentrate on India and East Asia, but to India the view on Asia differs: for India not just east of India is important, but also Afghanistan, Pakistan and West Asia. Afghanistan is more important to India than East Asia, particularly because it is closer to India. US withdrawal from Afghanistan is significant and India sees it as a retreat which will only help Pakistan and China. The third strategic difference between India and US in Asia is that India’s top priority is border disputes with China and Pakistan, both of which want to contest borders with India. China uses an argument that the issue continues because the argument has historical roots, and therefore takes time to settle. It also bothers India that there is a close relationship between China and Pakistan trade-wise, e.g. Chinese arms sales to Pakistan, which is also likely to increase. Economic competition with China e.g. in Afghanistan doesn’t bother India, but rather the border disputes and territorial claims that China makes, both on India and other Asian countries, Professor Singh argued. China’s claims for threatened maritime security also imply that it is not a status quo power but an expanding one, she said. On the one hand there are good trading relations between China and other Asian countries.  On the other hand there is expansionist China. And China has done nothing to dispel this impression, that it is a developing expansionist power, which is why India as well as other countries welcome American naval presence in Asia.

Friendly ties between Beijing and New Delhi are essential for stability in South Asia, Professor Singh stressed. China sees Indian government as weak, with too many corruption scandals that have been dropping economic growth, but concludes that India will emerge stronger. China has also noted India devoting time to Sri Lanka, Bangladesh and Myanmar, and India is looking East, cooperating with the US, Japan and Australia. More importantly the Chinese have noted that Indian defence planning focuses on two front wars with China and Pakistan, and that India’s main concern is to avoid land war with China. China will compete for control for some parts of the Indian Ocean, Professor Singh said. US and India are expanding naval power because China is making territorial claims and not just in the Pacific but also on the Indian Ocean area to back up its military power. In her personal view China and India don’t agree very much, said Prof Singh. They agree on state sovereignty and the reform of international organisations, both are members of the BRICS and so on, but otherwise disputes are great between them. 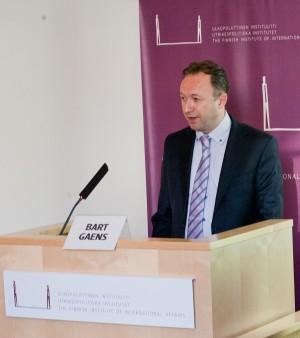 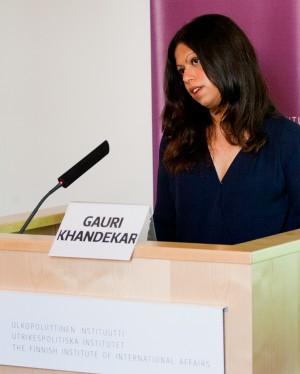