Framsida / Evenemang / Interpreting Turkey after the June Parliamentary...
Dela med andra
Dela med andra
The parliamentary elections of June 7 brought a major change in Turkey as the governing AKP, in power for thirteen years, lost its absolute majority. The result is a new election in November. How should we interpret what is going on in Turkey? Turkish pro-EU actors tried to domesticate a party of political Islamists to their liberal agenda, but this project ended in a failure. Is there a way out of the current power struggle? What is the source of the current violence? Turkish foreign policy has recently been completely driven by domestic, Islamic conservative state project. What are the prospects that this state of affairs will continue in the foreseeable future?
Speakers:Murat Yetkin, Editor-in-Chief, Hurriyet Daily News
Svante E. Cornell, Director of the Institute for Security and Development Policy
Comments: Toni Alaranta, Senior Research Fellow, the Finnish Institute of International Affairs
Chair: Mika Aaltola, Programme Director, Global Security Research Programme, the Finnish Institute of International Affairs
Summary of the seminar:

Mr. Murat Yetkin offered some of his reflections and personal experiences on the current developments taking place in Turkey. He pointed out that since the parliamentary elections in June, there have been dramatic changes in the Turkish society. On a personal level he pointed to the raiding of the offices of the Hurriyet Daily News newspaper. One of these raids was conducted by an AKP youth organization. However, the head of this organization was not sanctioned for these actions.

There has also been an increase in police action directed against weekly newspapers based on the claim that the papers were insulting the current president. Mr. Yetkin pointed out that these worrying trends might spill over to other sectors of society.

Another important change that Mr. Yetkin pointed out was the clashes between the Kurdish party HDP and Turkish nationalists. This has brought to the fore an intensified social conflict between Turks and Kurds in Turkey.

According to Mr. Yetkin these developments were unimaginable six months ago. At that time there was an agreement between the Turkish government and the PKK with a real promise of political settlement in the Turkish-Kurdish conflict. Furthermore, the developments in Turkish economy were encouraging and the ruling AKP party had consolidated its position.

Mr. Yetkin argued that an important shift in AKP’s approach to the political situation was brought on by HDP’s announcement in parliament that the party would not support a move to a presidential system. A move that president Erdogan has strongly advocated. In order to change the Turkish constitution and achieve a presidential system AKP needed two thirds of the parliamentary seats. With the leader of the HPD, Selahattin Demirstas, openly opposing the plans by AKP, Erdogan distanced himself from the peace process with PKK.

The June elections meant a loss of majority for the AKP for the first time in 13 years. The HDP got 13% of the vote – and this is unprecedented since it has been a Kurdish party. According to Mr. Yetkin the party received support from many different sides in Turkish society.

After the June elections there were efforts by the current Turkish Prime Minister Ahmed Davutoglu to form a coalition government between CHP and AKP. However these efforts were not supported by president Erdogan and he proceeded to announce a re-election.

According to Mr. Yetkin the key question now is what will happen if the election result in November is similar to the June elections. This is crucial since Erdogan still has the power to order a re-election.

The current economic, social and political situation in Turkey is highly tense. With regard to economic development Mr. Yetkin pointed out that the credit rating agency Moody’s has issued a warning saying that, if there is no government in Turkey by the end of 2015 Turkey could be assessed as being a risky investment target. At the same time the current Turkish economic growth is slowing down and youth unemployment is rising.

The domestic stability in Turkey is in danger and the security situation facing decision-making on foreign policy is very difficult with the ongoing crises in Ukraine, Syria, and Iraq. In addition Turkey has received approximately two million refugees from Syria and the neighboring region. With regard to immigration Mr. Yetkin emphasized that Europe hasn’t yet realized the scale of the issue. He pointed out that the problem for North Europe is not the human flows from the Middle East but rather the migration from sub-Saharan Africa. Mr. Yetkin considered Northern Europe as being unprepared for these developments.

Against this background the re-election will take place under very difficult circumstances.

During and before the June 7th elections Erdogan and Davutoglu have decided to modify their Syria policy. According to Mr. Yetkin the problem for Turkey has been the decision to get mixed up in the Syrian civil war.

Svante Cornell – Director of the Institute for Security and Development Policy

Dr. Svante Cornell addressed the way in which the developments in Turkey differed from the expectations before the elections. According to his analysis the developments in Turkey after the June parliamentary elections have seen an escalation of a trend that was in place before the elections. This development is largely characterized by the increased political theater of the AKP party, the ignoring of the Turkish constitution by president Erdogan and the abandoning of the peace process with PKK.

At the time of AKP’s rise in Turkey, the party was largely seen by outside observers as representing the post-islamist party and the ”moderate muslims”. At that time AKP was largely supported by both the West and Turkish liberals. However the changes brought on by the AKP rule were not the institutionalization of a liberal government but rather the replacement of the old military regime with an authoritarian Islamic government and strongman rule.

According to Dr. Cornell the rise of the AKP contains both an ideological component and a personal component. The ideological component is based on AKPs background in the Millî Görüş movement – which represents an orthodox orientation of Sunni Islam. Unlike most other Sufi organizations it’s based on a close observation of religious rules and norms. This movement was opposed to the westernization of the Ottoman Empire already before the foundation of the Turkish republic. It should be noted that Ottoman Islam was a very liberal form of Islam and the rise of the movement had its roots in the more conservative eastern roots of the religion. Another reference point for this movement was the fascist tradition in Europe. These influences were partly taken up both in the islamist and nationalist circles. The third source of inspiration for the movement was the Muslim brotherhood, founded in Egypt. The movement also has strong links to anti-Semitism and conspiracy theories. In Turkey the movement was forced to change its rhetoric by the 1997 military coup. Since that time they have been forced to hide their ideology from public attention.

Concerning the personal dimension in the rise of the AKP, Dr. Cornell considered the person of president Erdogan as playing a very strong role in the party. This represents a clear break from the past traditions of the AKP since the party used to be based on collegial leadership. However in 2008 Erdogan became the ”de facto” leader of the party. Since then he has supported transfer to a presidential system. According to Dr. Cornell the idea is based on an understanding of democracy that would effectively constitute a system run by an elected despot.

The strong role of president Erdogan has also changed the role of the founders of AKP. The party has become essentially Erdogan’s party. This can be seen for example in the rift between AKP and the Gülen movement. When consolidating his power, president Erdogan moved the military out of politics and brought in the Gülen movement. However, recently he has reversed this trend.

Summing up, Dr. Cornell considered that Turkey is currently going through a deinstitutionalization of the established political system. During this process the cabinet and the parliament have been effectively sidelined and the occurring current changes are unconstitutional. The AKP party is establishing a highly corrupt form of crony capitalism in Turkey. At the same time the party is placing restrictions on social media, civil rights and taking forward the Islamization of the education system.

With regard to Turkey’s external relations, Dr. Cornell stated that Turkey is currently supporting Al Nusra and other Islamic movements. This leaves open the question of whether Turkey still can be regarded as a Western ally. According to Dr. Cornell it is also questionable whether Turkey can still be considered a democracy since the Turkish elections are not free.

However, with all these developments it should be noted that president Erdogan does not have the unconditional support of the Turkish people. The problem is that in order for these trends to change Erdogan’s one man rule has to come to an end. It is likely that president Erdogan is ready to go very far to secure his position. This will in turn result in a very unstable Turkey.

In his comments Dr. Alaranta argued that the previous presentations painted a fairly good picture of the current developments in Turkey. Dr. Alaranta considered the changes in the support base of the AKP party in Turkey. In the past the supporters of the AKP could be divided into four main groups: the pro-EU liberals; the conservative Kurds; the nationalist conservative Turkish constituency – that is the current center-right and the political Islamists.

According to Dr. Alaranta the first group, the pro-EU liberals, are gone from this support base. The conservative Kurds are still trying to fight for Kurdish rights but they don’t agree with liberal leftist Kurds. As for the nationalist conservative Turkish part, they are still active and the political Islamists are in power.

This represents a shift from early the 2000’s. According to Dr. Alaranta, back in 2002 the liberal emancipatory narrative regarding the AKP was very popular. The core message proffered by this narrative was that the AKP was a medium for the liberals to force reform on the Kemalist-statist system. This seemed to be the case between the years 2002-2005.

However, already in 2006 a prominent Turkish scholarcriticized the AKP for turning from conservatism to fascism. The ongoing transition did not happen in the last few years. Erdogan has been promoting a slogan stating that 99% of the Turkish population is Muslim.

Regarding Turkey’s foreign relations Dr. Alaranta noted that Turkey does have a highly problematic environment. There might be a case for ousting Assad from Syria but this has created problems for Turkey from Islamists.

As to the developments within Turkey, Dr. Alaranta emphasized that there is resistance to AKP rule from the Turkish society and the current domestic situation is very unstable. 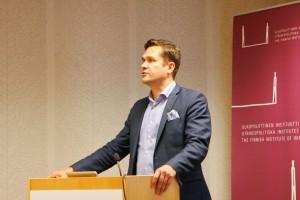 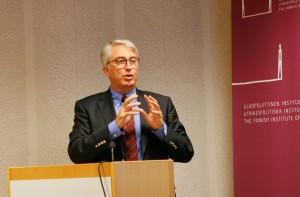 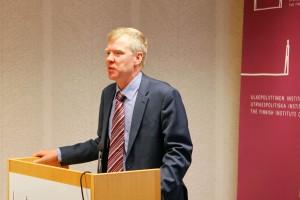 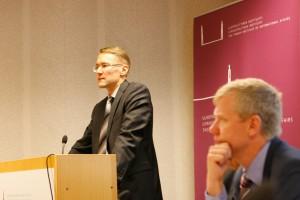 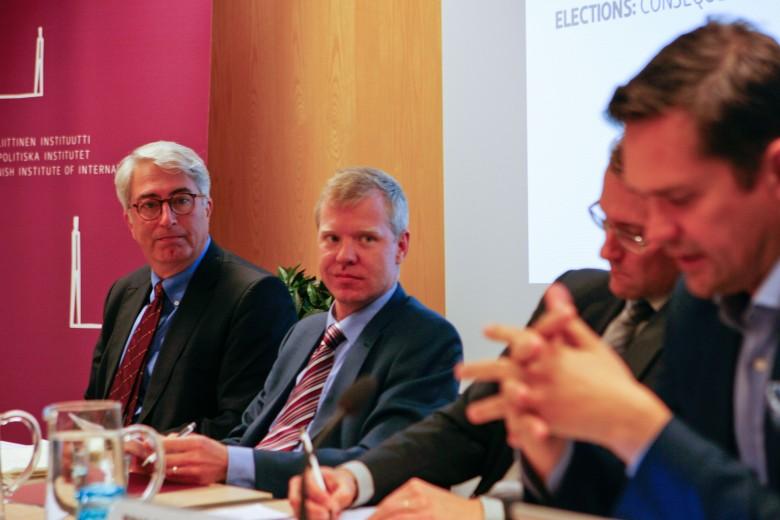